Frank Luntz Afraid Of Occupy Movement, But Ed Schultz Not Afraid Of Luntz 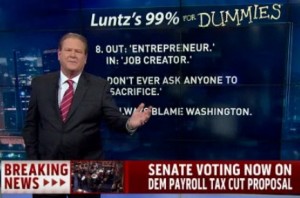 On Thursday night’s The Ed Show, host Ed Schultz joined 99 percenters across the nation in celebrating Republican pollster Frank Luntz‘s admission that he’s “frightened to death” of the Occupy Wall Street movement. Schultz and guest Alan Grayson correctly assess Luntz’s fear as a positive sign that the movement is having a real impact, but they badly underestimate Luntz’s Jedi mind-trickery, declaring that it won’t work this time.

Luntz told a meeting of the Republican Governors Association, earlier this week, that he’s “…so scared of this anti-Wall Street effort. I’m frightened to death. They’re having an impact on what the American people think of capitalism.”

He’s so scared, in fact, that he’s had the “capitalism” scared right out of him. “They should occupy a job and take a bath,” Luntz said. “I get that joke. But man, they’re having an impact on what the American people think of capitalism. And so I’m trying to get that word removed and replace it with either economic freedom or free market.”

He then laid out some suggestions on how Republicans could Orwellize their language surrounding the Occupy Movement, which Schultz went over with some bitter mockery.  One of the more telling items on the list is Luntz’s marching orders on the phrase “middle class.” As Ed puts it, “Number three, Republicans should forget about winning the battle over the middle class. Don’t ever use the term middle class. Refer to them as hard-working taxpayers. Have you noticed on this program I’ve told you that the Republicans never use the term ‘middle class’ in any kind of interview? Now you’re going to hear hard-working taxpayers a lot.”

Ed’s interpretation of Luntz’s suggestions is dead on, and I doubt even Luntz would disagree with them. Schultz is then joined by former Congressman Alan Grayson (D-FL), and while their mockery of Luntz’s simple tricks is warranted, they conclude that those tricks won’t work this time:

Here’s the thing. There is no earthly reason Frank Luntz’s tricks should ever work, because he does them right out in the open. It’s like Obi-Wan Kenobi going on TNN (Tatooine News Network) and saying, “Y’know, all you really have to do is say, ‘These aren’t the ‘droids you’re looking for,’ and the cops’ll let you go!”

It’s public knowledge that his entire job is to fool idiots, and he is a genius at it. The idiots still fall for it every time, or at least the idiots who decide every election (the media call them “independents”). Exposing Luntz’s tricks doesn’t do any good; he’s not hiding them.

This is where I break with a lot of liberals, Ed included. They always think that the answer is to smarten people up. In Ed’s case, I think it’s because he has a real emotional investment in the working people, he cares. I care, too, but at a certain point, I throw up my hands and say, “You’re getting the government you deserve.”

Whereas Ed admirably, and doggedly, covered the protests in Wisconsin earlier this year, the first rumblings of the unrest to follow, my visceral reaction was to wonder where these people were during the 2010 mid-terms. It’s great that Wisconsin is working to undo what Scott Walker has done, but what did these people think he was going to do when they voted for him?

So, while Ed and Grayson are confident Luntz’s wordplay won’t work this time, I renew my call for Democrats to find their own evil genius. Stop being so self-conscious, and start Luntzinizing your speech, no matter how stupid it feels. For example, President Obama, stop “asking the wealthy to pay a little more,” and start demanding that they fulfill their responsibility to the country that made them so successful.

The Luntz effect is all around us, even when  he’s not involved, because our media is attenuated to pro-corporate language. Ever wonder why use of the term “job creation” is so heavily favored over “job growth” by our news media? The only difference is that one is accurate, while the other is corporate propaganda. Guess which one is favored by more than two-to-one?

The 99% need their own Frank Luntz, because being right just isn’t enough.

RELATED: Ed Schultz On Being Named One Of The ‘Least Influential People Alive’: ‘Kiss My Ass, GQ’

Speaking of the 99%, I noted with some amusement that GQ magazine recently named both Ed Schultz and President Obama to their “Least Influential” list, which both men should take as a badge of honor. It’s like having Marie Antoinette name you “Worst Cake-Eater”; their idea of influence is steering you toward the right $500 necktie.

While others get credit for the Occupy Wall Street movement, it was Ed Schultz who blanketed the midwest with coverage of workers’ protests there last winter, lending his voice to what was arguably the first wave of this populist uprising, and who was the first mainstream media figure to embed himself with the OWS protesters. That might not be the kind of influence GQ can feel, but lots of other people can.