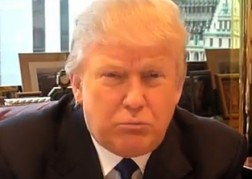 The NY Times reported today that NBC reality star (and self-proclaimed billionaire) Donald Trump would be moderating a GOP presidential debate on December 27th, sponsored by conservative media outlet Newsmax. In the hours that have followed, the cable punditry, as well as the Twittersphere, have had a field day mocking the selection of a reality show host-cum-pretend political personality to host what many in the news media liked to think was a serious business. Trump’s selection makes a complete mockery of an institutional process that is already short on credibility and gravitas, and any serious GOP candidate should do the right thing, and politely decline participation.

The common critique of the GOP debates thus far has been that they’ve been too similar to the sorts of competitive reality shows that get great ratings, but are panned by critics. Like a Jersey Shore marathon, the debates thus far have been long on style and production polish, and short on substance.

Take, for example, the recent CNBC hosted debate that focused on economic issues. The answers to how to best solve a complicated and troubled global economy provided by the candidates were the sort of oversimplified platitudes and banalities that seem to best exemplify why we were in such economic trouble to begin with. Thirty-second soundbites do not good policy make.

But! The debates have been wonderfully entertaining. The current slate of GOP candidates features really compelling characters, and they have fueled great news narratives and conflicts, lest we forget the gaffes, that have made the debate season a gripping viewer experience, even if the oversimplified answers most often provided the candidates seem to fall far short of the mark. (Note, this is not a comment on the GOP policies per se, but rather, the process itself.) While the debates are a fun, if disposable, package of bubble-gum infotainment, there should at least be the artifice of seriousness. This is why the inclusion of Donald Trump is all sorts of wrong.

The GOP has something of an image problem right now. With gaffes galore, and the frontrunner status having about as much meaning as a Klout score, Trump is the last thing that the Republican party needs. Of all the candidates who have come and gone, led and fallen, none became more of a joke than Trump, and his newly cast role of presidential debate moderator is just as laughable as asking Michael Moore to moderate a democratic debate. Most importantly, if the media wants moderators to be taken seriously moving forward, this “debate” should be called what it is: a performance, not unlike other Trump Productions like the Miss America Pageant, Celebrity Apprentice, and any other dopey example you can think of.

RELATED: Tamron Hall To Trump: Could Your Debate Look ‘Like An Episode Of The Apprentice?’

Trump is nothing but a showman, a P.T. Barnum for the reality television age who knows how to package aspirational messaging to the masses of not-yet-actualized millionaires that buy his books, and somehow connect to his paper-thin rhetoric. Put simply, Trump’s messaging is bad for America — whether it be his casual description of his good relationship with “the blacks,” or his quixotic and divisive quest for President Obama’s birth certificate — Trump has consistently been on the wrong side of what most reasonable people call good judgment. And yet, the GOP presidential candidates are now asked to cede to him the authority of moderating a debate on which of them would ostensibly lead our country out of its current woes? I call bullshit.

And so should any GOP candidate who calls themselves a serious candidate. Jon Hunstman appears to be leading the pack on this, telling Business Insider via email “Lol. We look forward to watching Mitt and Newt suck-up to The Donald with a big bowl of popcorn.”

Candidates who take their candidacies for president seriously should follow suit, and this should be a litmus test to demonstrate who is willing to admit that the charade of politics evidenced by a Trump-moderated debate is exactly the problem that the United States faces, and who wants to be the next political Snooki.