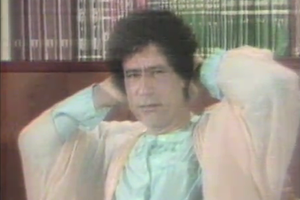 If there’s one thing that Muammar Abu Minyar al-Gaddafi is known for (that isn’t being a ruthless dictator who’s suppressed his people for decades), it’s his totally kicking styles! And, while The Daily Show and every other comedy program that tackles current events has been getting tons of mileage out of his many interesting looks lately, an unused NBC pilot handled it in a unique way back in 1986. The video, now available online, shows Today’s Nancy Foreman using clips of Gaddafi to do a hilarious little fashion show in one of the best pieces of classic Gaddafi humor since the National Lampoon tried to spell his name right.

While the video’s funny enough as it is, it shows an interesting glimpse into what might have been in the comedy news world. The idea of a comedy news show was nothing new at the time (you wouldn’t even need to turn the channel to see the, at that point, 11-years-old Weekend Update on SNL), however, as Kurt Andersen explains, using a montage of actual news footage for your comedy was a fresh take. Andersen was one of the people behind the pilot and linked to the video on his Twitter. He told Mediaite this about the video’s backstory:

“It was from a comedy-news pilot I created & executive produced for NBC News in 1986-87 called After Hours. Nancy Foreman, who voiced it, we borrowed from Today. The anchors were [Deborah] Norville and Stephen Frazier (now at CNN). Graydon Carter was one of my collaborators on the show.”

Check out the clip from After Hours below: