Geraldo Doubles Down On The Factor: ‘Parents, Don’t Let Your Kids Go Out Wearing These Damn Hoodies’
video

Geraldo Doubles Down On The Factor: ‘Parents, Don’t Let Your Kids Go Out Wearing These Damn Hoodies’ 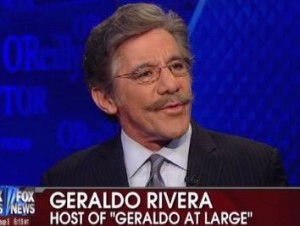 It’s been a pretty tough day for Fox News contributor Geraldo Rivera. Reacting to the murder of black Florida teenager Trayvon Martin, Geraldo suggested that the hoodie Martin was wearing played a role in his death at the hands of George Zimmerman. After a full day of being ridiculed on the internet for his remarks, Geraldo rounded it out by clarifying what he said to Bill O’Reilly tonight, who defended what Geraldo said and pointed to a time when he was similarly criticized in the media for supposedly blaming the victim.

O’Reilly opened by asking Geraldo if he supported the “stop and frisk” program being implemented by cops in New York City. Geraldo praised the program, calling Michael Bloomberg “the best mayor New York has ever had” and suggested that there has not been much criticism from parents of black children of the program because they actually believe it keeps the city safer. By giving cops the right to frisk someone based on “reasonable suspicion,” Geraldo argued it makes criminals think twice before hiding guns in their jackets while walking in public.

But then Geraldo declares that much of this reasonable suspicion is based on how people look when they’re walking out on the streets. And that’s when he went back to the same argument he made earlier today.

He also brought up the Unabomber as another example of a criminal wearing a hoodie. O’Reilly brought up Geraldo’s earlier comments, and Geraldo tried to justify what he meant earlier as a cautionary tale for the parents of America.

“Parents, don’t let your kids go out wearing these damn hoodies, because they could attract the attention not only of the cops but of nutjobs apparently like this George Zimmerman. And when they see and respond, it is a stereotype, it is repugnant, it is all the things that offend us, but it is real life. It is reality.”

O’Reilly asked Geraldo why “people are getting mad” at him if that’s all he meant. Geraldo insisted that he was not, in any way, trying to “blame the victim for his own demise” and was merely trying to warn about how others will view someone wearing a hoodie, not necessarily himself. And somehow, O’Reilly managed to steer the conversation to himself, saying he was in a similar situation when he was criticized for saying of a drunk girl walking around the West Side Highway with a bare midriff that “every predator in the world is gonna pick that up at two in the morning.” O’Reilly said that both he and Geraldo were not blaming the victims, per se, they were just offering a “cautionary tale.”

Geraldo said he didn’t care too much about the criticism over Facebook and Twitter, because as he told O’Reilly, “I’m the one who punched out the KKK and the Neo-Nazis.”