Giuliani Blasts Beyoncé’s VMA Performance: ‘I Saved More Black Lives’ Than She Has 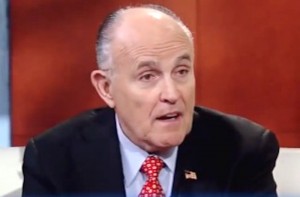 Beyoncé rocked the house last night with her performance at the VMA’s, but former mayor and current Queen Bey critic Rudy Giuliani was not quite so impressed.

Giuliani appeared on Monday morning’s Fox & Friends, where he was invited to talk about how Beyoncé used her show as an opportunity once again to make a statement on police brutality towards African Americans. Ainsley Earhardt pointed out how the pop idol invited the Mothers of the Movement as her honorary guests, and that her segment began by depicting her backup dancers as angelic figures shot dead one at a time by cops.

“I ran the largest and best police department in the world, the New York City Police Department,” Giuliani opined. “I saved more black lives than any of those people you saw on stage.”

Giuliani went on to tout his police record some more, and say that his mayorship was responsible for the betterment of several major boroughs of New York. He also bashed social figures and politicians who comment on police brutality incidents but refuse to do anything to help troubled African-American inner city communities.

Brian Kilmeade called it “pretty indelible” for Beyonce to push her message at such a high-profile event, which Giuliani affirmed by saying “it’s a shame.”

Giuliani has criticized Beyonce for politically-charged performances before, particularly when he blasted her for using her Super Bowl halftime show as an “outrageous” attack on the police.