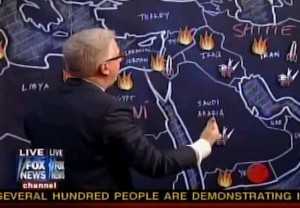 Things are getting serious in the Mediterranean and they’re also getting serious on The Glenn Beck Show. While complaining that the media is depicting the Muslim Brotherhood as good guys (not really true) and that only Fox News has dared to compare the protests to the 1979 revolution in Iran (certainly not true), Beck is using this week to give his viewers the real story of what’s going on Egypt and how this is just the beginning of “the coming insurrection.” Like I said, serious stuff. Of course, if you don’t believe me, just take a look at the fact that Beck has an entire army of chalkboards! Seriously, that image is what George Soros probably sees in nightmares after eating too late at night.

Beck needed every one of those chalkboards as he attempted to give a description of just what is happening in the world. Using maps of the world, he began placing different magnets to show the chain of events as he saw them. Of course, this is Beck we’re talking about, so it couldn’t just be as dry as that. The magnets included cartoon fires to demonstrate riots as well as blue smiley faces that represented dictators we were friends with (“frenemies” as Beck hilariously called them).

Smiley faces aside, this was serious stuff with Beck pointing to the uprising in Tunisia and claiming it may be another Archduke Ferdinand:

“I think Tunisia is our Archduke Ferdinand that I’ve been telling you about, warning that it would start in some place that wouldn’t look like anything and most of us wouldn’t understand it. He was the guy assassinated in Sarajevo, June 1914. Month later, Austria-Hungary declared war against Serbia and the rest is called World War I. I believe a snowball is being formed and is starting to roll. There are too many people that want to have their dream world. You’re not going to be able to catch it, but you can, at least, prepare to not get caught in the snowball.”

Heady stuff. Beck predicts a world where spreading riots and rising prices bring down society as we know it, all of which is being controlled by enemies of freedom hoping to craft something new from the wreckage. And he positions himself as the only one who’s able to stand beside us and point out the coming onslaught to, if not stop, lessen the impact. And, like the insurrection, nothing will be able to stop Beck…unless chalkboard prices rise, too. Then he’d be in trouble.