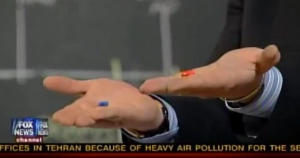 Today on his show, Glenn Beck offered up another one of his great history lessons, this time on the fall of Rome and its similarities to our country’s current struggles. Of course, this isn’t a comparison that’s new. Any time a world power, state power, or, you know, high school student council starts to falter, someone’s going to compare them to Rome. So, how’s Beck going to shake things up? By starting off with clips from The Matrix of course. Take the blue pill and this all goes away. Take the red pill though…AND YOU GET TO LEARN ABOUT ROME!

Flanked by a bust of Julius Caesar, Beck brought out a literal red pill and a blue pill and after the viewer symbolically took the red pill (by not changing the channel), he broke into his version of HBO’s Rome, only one without nudity and done entirely on a chalkboard. Successfully connecting America to Rome. Easy. Successfully connecting Rome to The Matrix? That’s only something Beck could accomplish. As for that first connection, Beck had a lot of evidence to choose from. He pointed to the FCC’s proposed rationing of the Internet (making sure to note FCC Chairman Julius Genachowski’s first name) as well as the Senate’s passing of the Food Safety Bill as signs that America might be going the way of that great empire of old.

Really though, we should be more concerned about our country heading the way of the Matrix films. A period of prosperity and awesomeness followed only by a disappointing mess redeemed only by Monica Bellucci’s tight dress. Fortunately, as Beck promised later in the show, we aren’t at the end of the timeline and we can still save our nation. The choice is yours. We don’t have to be Neo.