Glenn Beck: ‘You Can Identify Everyone In America Today’ As A Character From It’s A Wonderful Life 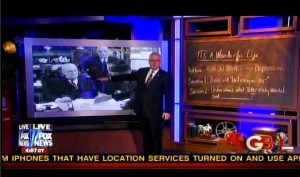 It’s been a long strange trip for Frank Capra’s It’s a Wonderful Life. When it was first released in 1946, it received mixed reviews. However, it’s now considered an all time classic. And, in 1947, the FBI completed a memo calling the film Communist propaganda. However, today in 2011, Glenn Beck, enemy of Communists everywhere, used the film to explain his ideology and how we’re all being robbed by the evil Federal Reserve.

Come on, folks. Lets take a trip to Bedford Falls with our guardian angel, Glenn Beck.

Yes, it was another instance of our favorite kind of opinion show, the one where the host uses popular film to create a loopy and strained metaphor explaining their point (see: this, this, and definitely this). Beck weaved It’s a Wonderful Life throughout the entire episode, helpfully explaining that every single person he discusses has a correlation in the film.

Well, who’s evil Mr. Potter, the scary banker who tried to bring down the Buildings and Loan and rip people off so that he could gain control of the town? Why, that’s Ben Bernanke, of course! And the unions are Tom, the guy who asked for way too much money even though he only needed a little. And, we, the faithful Beck viewers? We’re little Mrs. Davis, the charming woman who only asked for $17.50, getting a kiss on the cheek from George Bailey himself.

That’s leads to the big question: who is George Bailey, the wonderful hero who can save a town, lasso a moon, and become the hit of a high school dance years after he graduated? Well, Beck promised he’d reveal that by the end of the show.

Half an hour later though, there was nothing.

Here, with absolutely no edits, is an actual g-chat transcript between this writer and one of the Mediaite editors that took place at 5:40 pm:

Me: WHO’S GEORGE BAILEY?!?!??!
Me: WTF
Editor: I KNOW!
Me: AGGHH!
Me: commercial break
Me: still nothing
Editor: Going to give you this video.. then if he names.. I will add
Me: yeah
Me: he will
Me: he’s gonna hold it till the end and then tell us it’s….us

Then, 10 minutes later. Glenn Beck looked in the camera and said this:

“Our George Bailey has to be…you!”

Now, I’m not posting that transcript to brag. It’s just because, midway through today’s show, Fox News aired a commercial promising an upcoming Glenn Beck trivia contest and I just want you all to know that you’re all going down!

I know what you’re wondering; “How can we be Mrs. Davis and George Bailey at the same time? It’s impossible to kiss yourself on the cheek, I’ve tried.” Well, Beck explained it in the episode’s last segment. After playing a montage of the “Flash Mobs of Goodness” that were held today, Beck said that we all need to be “Mrs. Davis, Jimmy Stewart, and Frank Capra” all rolled into one. Huh. I guess there was a shape-shifting plot in that film that I missed.

This is why I love these movie metaphor episodes. They’ve always got great clips and they’re all just a little bit insane.

Check out two moments from the episode (the reveals of Mr. Potter and George Bailey) from Fox News below: