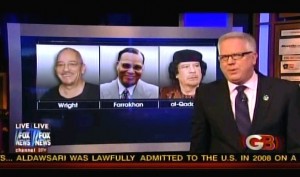 Glenn Beck was not happy with President Obama’s remarks on Libya yesterday for a number of reasons. Most importantly because it cut into his show which Beck seems to think was intentional (unless he’s just joking…repeatedly…two days in a row). The other problem was that it came way too late in comparison with Obama’s frequent comments on the situation in Egypt. And the final issue Beck had was that Obama never seemed to mention Muammar Gaddafi’s name and hasn’t in any recent statements. Now why would he do that? Glenn Beck is on the case.

Beck’s research team discovered what they think is the smoking gun: an interview that Obama did with Tim Russert in 2008 during the campaign trail. In the interview, Russert asked about a quote from Jeremiah Wright who said that he and Louis Farrakhan had once traveled to Libya to meet with Gaddafi in 1984 and that, when Obama’s political opponents found out about that meeting, his Jewish support would “dry up quicker than a snowball in hell.” Yep, Reverend Wright’s back in play and he’s bringing Lou Farrakhan with him!

So the implication here is that Obama can’t speak out and specifically mention Gaddafi because Wright once went on a trip with Farrakhan a few decades ago to meet with Gaddafi so Obama may have been taught to like the guy and also because Jewish people may find that clip and get angry. I guess. Well, that wouldn’t be good. No one wants to anger the Jewish population.