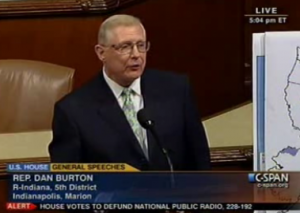 Republican Congressman Dan Burton finished his prepared remarks on the floor of the House of Representatives and was ready to yield to the next speaker, but there was only one problem: Congressman Louie Gohmert was scheduled next and was nowhere to be found. Burton was then forced to engage in a ten minute monologue as he was advised to “keep talking.”

Burton was clearly uncomfortable having to come up with ten minutes of material, but provided much humorous commentary as he admitted “this is embarrassing.” Given that Gohmert was so late, Burton wondered out loud, “oh it’s St. Patrick’s day, you don’t think he’s been having a little green libation do you?” Then he predicted what Gohmert might be speaking about and suggested he looks forward to the speech, “after I hit him in the nose for not being here on time.” In between a series of awkward silences, we also got to learn that Burton likes movies about Irish dancers, as he encouraged everyone to go see a new movie.

Afterwards, Burton told The Daily Caller, “this is a promise, if you guys watch me and if this ever happens again I will have a repertoire of my famous jokes, and I’ll start reeling ‘em off one after the other.” It seems some politicians don’t know what to do with unscripted moments, but at least Burton was a good sport about the whole ordeal.