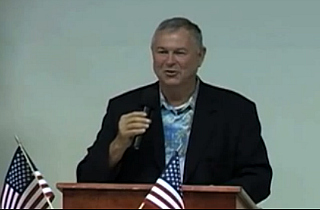 Speaking to a group of supporters this weekend, Rep. Dana Rohrbacher (R-CA) completely dismissed global warming, rebuking belief in its negative effects as part of a greater plot by “liberals” to institute “global government.”

The Nation first reported on the remarks this weekend, which arose as Rorhbacker responded to California Democratic Sen. Barbara Boxer‘s comments that the recent slew of wildfires are the result of global warming.

He continued on with more warnings for his audience: