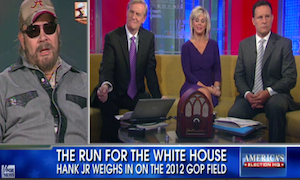 Country music singer Hank Williams Jr. compared President Obama to Adolph Hitler in an awkward interview Monday morning on Fox and Friends. Williams called the golf summit the president had with Speaker of the House John Boehner “one of the biggest political mistakes ever.” “It would be like Hitler playing golf with Netanyahu, OK?”

Williams appeared on the program to share his thoughts on politics, but the segment got weird early on as the country music star curiously sulked with his arms crossed.

Anchor Gretchen Carlson asked Williams who he liked in the GOP race, which he replied “Nobody.” A shocked Steve Doocy exclaimed, “Nobody!?”

This triggered Williams to bash Obama and Boehner’s golf game and compare the president to Hitler. All three Fox and Friends anchors sat nonplussed in utter bewilderment.

“Well, I’m glad you don’t, brother, because a lot of people do,” Williams snapped. “You know, they’re the enemy. They’re the enemy.” Kilmeade was thrown for a loop. “Who’s the enemy?”

Following the bizarre interview, Carlson disavowed the comparison of the president to the Nazi leader. “I just want to say that we disavow any of those comments or analogies that he’s made, at least I’m going to say that, disavow the analogy between Hitler and the president.”

Update: Williams released a statement this evening on his comments, via TMZ:

Williams Jr. says, “Some of us have strong opinions and are often misunderstood. My analogy was extreme – but it was to make a point. I was simply trying to explain how stupid it seemed to me – how ludicrous that pairing was.”

He continues, “They’re polar opposites and it made no sense. They don’t see eye-to-eye and never will. I have always respected the office of the President.”

Williams Jr. adds, “Every time the media brings up the Tea Party it’s painted as racist and extremists – but there’s never a backlash – no outrage to those comparisons… Working class people are hurting – and it doesn’t seem like anybody cares. When both sides are high-fiving it on the ninth hole when everybody else is without a job – it makes a whole lot of us angry. Something has to change. The policies have to change.”

Watch Williams’ interview with Fox and Friends below: