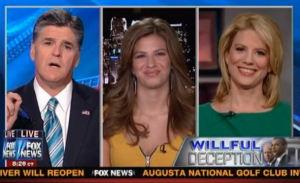 On Monday night, Sean Hannity invited Michelle Fields and Kirsten Powers to discuss what he called “the most deceptive administration in American history.” Taking on Vice President Joe Biden‘s gaffes, as well as President Barack Obama, Hannity drove his point, while Powers questioned whether the such a superlative is taking things too far.

About said deception, Hannity pointed to the reports about Biden’s staff trying to edit pool reports and no official Biden transcripts being released for about two months. He further recalled when Obama had “had his name edited into the White House biographies,” adding that “Obama operatives in the State Department are also editing official agency documents to praise the president.”

While editing a pool report is of course a problem, Powers said she questioned Hannity’s “most deceptive” assertion, noting, “I think Iran contra was a little more deceptive.” Hannity said the focus is the president, saying, “This campaign is about smear and slander” — and time and again, he gets away with it.

Fields said the press “isn’t on top of things.” Pointing to the edited pool report, she asked, “What do you expect.” She went on: “You were backing up these people and basically let them get elected without doing your job. The media failed to do their job in 2008, so for them to be upset is kind of ridiculous, because they’re the ones who protected them.”

From that point, Hannity turned to Powers, asking what kind of reaction Paul Ryan would have gotten had he made Biden’s “going to put y’all back in chains” remark.

There’s “no question that Biden gets a pass on things, Powers said, adding that the number of things that Biden’s gotten away with that would disqualify other candidates is “inexcusable.”

“This campaign is really a propaganda machine,” Fields chimed in. For example, she offered, the State Department “is now editing descriptions of countries and putting Obama’s foreign policy positions in them instead of the history of these countries and the historical context.”

And this being done with taxpayer money, she said, adding, ” I don’t see any media jumping on this, other than Fox News.”