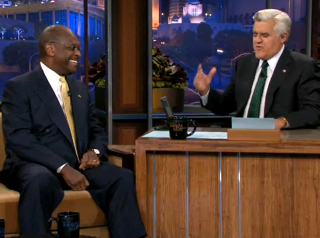 Herman Cain‘s rise to the top tier of presidential candidates has finally landed him in a place where his presence– given that his resume includes two fast food chains and a gospel album–seemed natural: late night TV. Cain joined host Jay Leno last night to chat about Sarah Palin‘s potential candidacy, the relevance of Donald Trump, and which of his fellow candidates has “good hair” or is a “grumpy old man.”

Cain began with the short version of his resume, of which the most interesting point is that this isn’t his first presidential run– that happened in the year 2000, but Cain explains that he quickly halted the campaign after the rest of the Republican Party “cleared the deck” for then-governor George W. Bush. He described how happy he was to find himself defeating his competition so soundly in the Florida straw poll, and credited that to two things: “the voice of the people is much stronger than the voice of the media,” and “message is more powerful than money.”

The topic then shifted to the other competition around him– or those who could potentially become precisely that. Advising New Jersey Governor Chris Christie, who he argued would make no difference to his campaign, Cain suggested not to jump in “because of the media hype,” but with the certainty that he needed to run. He didn’t have similarly profound advice for Palin, but thanked her for her voice in the campaign, and forgave her for calling him “Herm” (which some in the media wrote out more comically as “Herb”)– “she doesn’t know that only my enemies call me Herm.” Then came the fun part: word association with GOP Candidate names. Most of his answers were pedestrian and benign (Rick Perry got “good governor,” Rep. Michele Bachmann, “very nice lady”), but it’s the Rep. Ron Paul answer that will probably get the most play: “grumpy old man.” That said, his succinctly apt response to Rick Santorum, “stress,” is by far the highlight of this segment.

RELATED: Herman Cain Tells Wolf Blitzer That He Could Not Support Rick Perry As Nominee

There’s plenty more– the interview is fairly long for late night– including his explanation of why Donald Trump matters and a clarification on his remarks that he would not appoint a Muslim to his cabinet. The interview, via NBC, in two parts below: