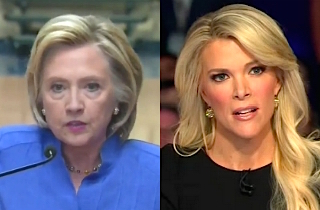 “I said it was outrageous, I stand by that,” Clinton said of Trump’s words. “I think more people should say the same.”

“But I just want to remind us that what they say about women — not one woman who is perfectly capable and incredibly impressive, able to take care of herself,” Clinton continued, referring to Kelly, “but all these women that I have fought for, worked for, stood up for, advocated for and want to be a president for, who may not have the opportunity to defend themselves, who may lose the right to exercise a personal choice if certain of the Republicans were to be successful, I don’t want that forgotten.”

While she said Trump “went way overboard” with his “offensive, outrageous, pick your adjective” comments, Clinton added that “what Marco Rubio said has as much of an impact in terms of where the Republican party is today as anybody else on that stage and it is deeply troubling and it should be to the press, not just to those of us who have been doing this work for so long.”

Despite past support for allowing abortions in cases of rape and incest, Marco Rubio appeared to reverse that position during last Thursday’s debate.