Hillary to Sanders: You Don’t Get to Be ‘Gatekeeper’ of Who’s Progressive and Who’s Not
video

Hillary to Sanders: You Don’t Get to Be ‘Gatekeeper’ of Who’s Progressive and Who’s Not 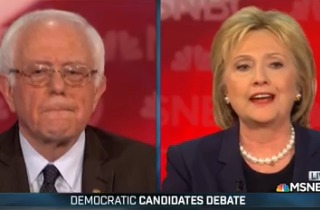 Early on in the MSNBC Democratic Debate, Rachel Maddow asked Hillary Clinton about how she and Bernie Sanders have been sparring lately over whether she is truly liberal enough, based on her history, to set the standard for the left.

Clinton responded by noting that her standard of progressivism entails making actual progress with policy, and said that under Sanders’ standard, very few would qualify to take leadership of the far right, not even President Obama. She rounded out her point by also lobbing barbs at Sanders’ history by saying that not even he would fall into his own categorization.

Sanders refuted these points by saying that it was politically realistic to demand systems of accountability for big money interests and the political process, as well as instituting the socialized elements of infrastructure he proposes. When Chuck Todd asked about his comments at the CNN Town Hall about the inherent difference between moderates and progressives, Sanders gave credit to Obama’s accomplishments, but doubled down on his distinction.

“Let’s not be… making an accusation or making an attack about where I stand and where I’ve always stood up. It is fair to say in your definition, as you being the self-proclaimed gatekeeper for progressivism, I don’t know anyone else who fits that definition. I know a lot of really hard fighting progressives in the democratic party who have stood up time and time again on behalf of those that are left behind and left out.”