Historic Thirst: Marco Rubio Becomes His Own State Of The Union Drinking Game 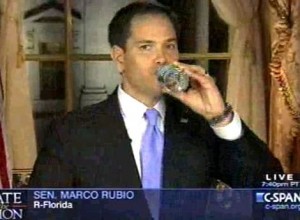 The State of the Union drinking game has become a political media cliche, and while delivering tonight’s official Republican rebuttal to President Obama‘s address, so did Senator Marco Rubio (R-FL). Tasked with the unfortunate duty of delivering one of the Republican rebuttals, Rubio spent most of his rebuttal alternately attacking the President, and whining about how mean Obama is to Republicans. The rebuttal, though, will be best remembered for a hilariously awkward mid-speech drink, and will surely cement the Curse of the SOTU Rebuttal in the minds of all future would-be party saviors. Unless his head literally explodes, Rand Paul will barely be noticed.

Things started to go wrong for Rubio when he tried to say the Rural Juror-esque phrase “the goal of global liberty,” or something like that. A few seconds later, Sen. Rubio was struggling to describe his frustration at the “false choices the President laid out tonight,” and comically reached offscreen for a drink of water, while eyeing the camera like it might steal his wallet if he looked away.

Anyone who has ever spoken publicly has to know how that feels, but as far as Rubio is concerned, it was a good night for Bobby Jindal.

Update: Well, no wonder Marco Rubio was so thirsty, they put him closer to the heat lamp than a large fries. If Republicans ever ask you to do their rebuttal, whoever you are, just say no: 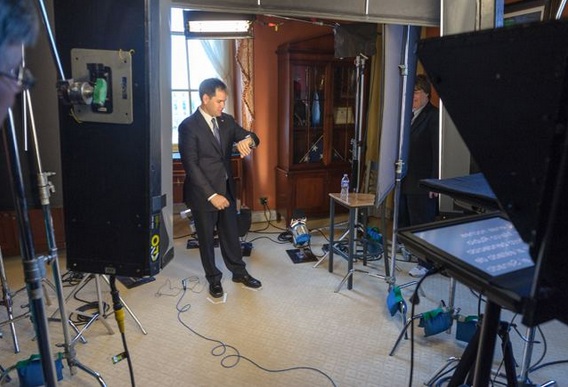