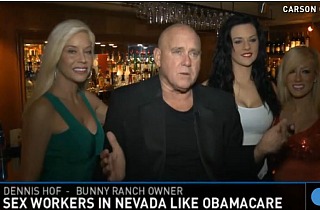 The sex workers in parts of Nevada where prostitution is legal are reportedly thrilled about the Affordable Care Act. According to a report in USA Today, which aired on a local NBC affiliate, legal “hookers” who have a difficult time finding health coverage will have options starting in January to which they would otherwise never have had access.

“The Affordable Care Act, Obamacare, has been touted as a boon to America’s self-employed,” said USA Today reporter George Warren. “That would include the independent contractors here at the Moonlight Bunny Ranch, otherwise known as prostitutes.”

The report features a number of sex workers at the Nevada brothel describing the frustrations they have had getting health coverage. “Usually you’re denied right away,” one prostitute said, “because I’m a working girl.”

“They absolutely equate us to illegal working girls that have very high rates of STDs and AIDS,” another said. “I have the best car insurance in the world, but that’s the only thing that’s covered.”

“It’s truly a miracle,” another said of the ACA.

The end of the report, however, notes that Hof called the ACA “a double-edged sword.” He said that while his employees will have easier access to health coverage, he will have to spend $250,000 more per year to cover his non-sex worker employees’ insurance.

Watch the clip below via USA Today: