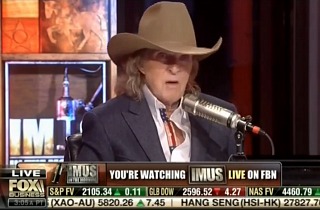 Whoa, Don Imus really does not like Dana Perino.

Last week, the Imus in the Morning FBN host went on a blistering tirade against his Fox colleague, one day after interviewing her about her new book, And the Good News Is…: Lessons and Advice from the Bright Side. The reason for his verbal lashing? Imus felt Perino walked into his studio with an attitude, and would only share “rehearsed talking points” about her book.

The interview took place Wednesday morning and, on the surface, seemed rather innocuous. But when viewed in retrospect, certain moments stand out as awkward triggers for Imus’ silent rage:

She referred to previous guest, country legend Dwight Yoakam, as her “warm-up act”; when Imus asked her how she ended up a White House press secretary, he found her answer guarded, and called her out for being “unwilling to tell” him the story; after Perino called her dog, Jasper, “America’s dog” — a point she made on other shows before — Imus dismissed the dog as “fine,” but “not America’s dog”; and then after the interview aired, Imus expressed mild frustration to his panelists that Perino was “rehearsed.”

Watch a portion of their interview below, via FBN:


And then came the following morning’s show, when Imus had… um… something… about Perino to get off his chest:

Don’t ask to be on this program and then come in here and be a jerk as Dana Perino was yesterday. God! Man, who needs that? I mean, there’s somebody who’s just, what, are you kidding me? God, that was irritating. I’m happy, if people ask me and they ask the show to be on to promote their book, I’m happy to do it, but then don’t come in here with an attitude. And then not want to have a conversation. Oh my God. You couldn’t have a conversation with her. She got her little talking points.

First of all, she was the press secretary, that was a mercy move. They had 37 press secretaries and they found her, I mean, I mean, what? Described Dwight Yoakam as your “opening act.” Another no-talent loser. Honest to God. Are you kidding me? She sucks and her book sucks. Oh, my God, that irritated me… I’m happy to help. Really, nobody’s more supportive than me. But don’t come in here and cop an attitude.

UPDATE — 12:55 p.m. ET: For those of you wondering why he might’ve felt comfortable enough to trash Perino like that, this might provide some insight: Imus announced today that he will be off FBN starting May 29.

Watch that rant below, via FBN: