Is Glenn Beck Losing His Audience? (Or Merely His Mojo) 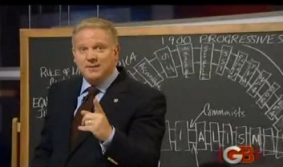 Is Glenn Beck’s time in the media klieg lights coming to a close? The latest Nielsen numbers reveal that Beck’s audience is down nearly 30% since the start of the year, from about 2.9 million viewers in January to 2.1 million in April. This statistic has, not surprisingly, generated some gleeful headlines from the Media Matters folks (among others) who posted a long piece about the ratings and declared that “making it through one of his insufferable, redundant shows feels like sitting through detention. The wow factor is long gone.” I don’t believe that’s quite what’s happening here. I suspect the drop is more likely a symptom of a larger issue: namely that the fringe element (which turns out isn’t so fringe) in this country is, shall we say, no longer struggling to be heard. But first a note about the ratings since that’s what has everyone up in arms this week.

Relatively speaking, Beck still has the kind of ratings that would turn just about everyone on cable TV green with envy. And just to put his numbers in fair context, year over year, everyone in cable is currently down. Some quite a lot. Just to give you a sense. Beck is down 4% from last April, Bill O’Reilly is down 3%, Keith Olbermann is down 28%, Campbell Brown is down 39%, Sean Hannity is down 17%, Rachel Maddow is down 8%. Also, it’s probably worth noting that viewer numbers traditionally drop in April. So there’s that.

I suspect the drop in numbers are striking an overblown chord because Beck has been such a juggernaut these last ten months. And not merely a ratings juggernaut, a cultural, and political, and media one, too. In a phenomenally short period of time, Beck not only became a sort of weird media darling, but also a political powerhouse the White House was eventually forced to respond to directly, as well as a name synonymous with what was great and/or terrible about Fox News, extreme rhetoric, and the Tea Party movement. The last is the key, I think. Beck had his finger on the zeitgeist — in this case a fearful and frustrated fringe — that has since overwhelmed the country long before anyone else, and proceeded to provide it with an utterly entertaining mainstream voice — if chalkboards and Mao dolls can be considered mainstream! — much to the amazement, and let’s be honest, the enjoyment of a lot of people. What these recent ratings make me wonder is if that ride is over. And if so, why.

Eric Boehlert at Media Matters thinks Beck’s Waterloo moment was the utterly incredible Eric Massa interview which he described as a “Hindenburg performance.” I tend to agree but not because of its Hindenburg nature, but because in some strange way I think it represented the pinnacle of what Beck does best: utterly unpredictable showmanship. It also represented a sort of culmination of what Beck had been after for so long: recognition from real politician (yes I know it was Eric Massa, but still…he was elected) and possible real life proof of his ever evolving theory that Obama’s administration is made up of a shady army of secret Maoists looking to wreak progressive havoc on the nation. And since then, and I say this as someone who tends to watch a lot of Beck, I’m not sure he’s regained himself. Because how do you follow what will likely go down as one of the most bizarre hours on live TV ever? You don’t. The chalkboard, while entertaining, doesn’t quite cut it. It’s like when the two main characters on your favorite TV show finally get married. Whatever comes next is a letdown. Fonzie meet shark?

NEXT >>> IS THERE A LARGER ISSUE AT PLAY?