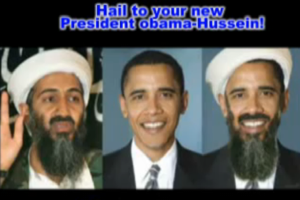 Do you ever wonder why it’s always that one conservative aunt that forwards you those chain emails about Barack Obama‘s secret plot to turn America into a socialist utopia? Salon‘s perusal of internet rumors in the last decade shows that conservatives are both more likely to spread false rumors about liberals via fowarded emails that liberals are about their opponents.

Salon’s J.L. Bell has compiled forwarded emails from the internet rumor debunking site Snopes.com discussing both Barack Obama and George W. Bush. While the Snopes team has, in the past, compiled the hottest internet rumors and found that a large chunk of post-2008 rumormongering centered around the current president, the comparison between Obama and Bush rumors adds a new layer of complexity to the discussion. Bell found that, not only were there more email rumors floating in cyberspace about Obama than Bush, those about the latter tended to be more accurate than those of the former:

There are many possible reasons for Obama being at the center of a significantly larger amount of false rumors than Bush, not the least of which is a palpable cultural difference between the way the left and the right employ the internet to propagate their ideas. Compare, for example, the first two major political campaigns waged online by either side: those of Howard Dean and Ron Paul. While the former focused mostly on fundraising and rallying the grassroots with bullet-pointed policy initiatives, the Paul campaign’s centerpiece was a blimp and a series of wacky YouTube videos. Granted, this is in part due to the fact that YouTube was not around during the 2004 campaign, which leads to another imporant point: YouTube was launched in 2005, five years into the Bush administration.

Unfortunately, while Bell does bring into the national conversation an important issue and makes a number of great observations, he lets his bias get the better of him and jumps the gun at his conclusion:

This evidence accumulated over ten years shows a shameful but undeniable fact of American politics: Our right wing now contains a lot more liars, and a lot more folks who spread lies out of gullibility or wishfulness, than our left wing.

Suggesting that a comparison of the number of chain emails from both sides that ignores the fact that people who are more likely to forward political emails happen to be on the right could lead to the “undeniable fact” that everyone right of center is a liar is, at the very least, unfair and premature, and could discredit his entire analysis to many readers, even some on the left. That doesn’t mean the anthropological angle of this story– why do conservatives send more political email forwards than their liberal counterparts?– isn’t worth revisiting by both the media and political analysts looking to maximize the usefulness of the internet in gaining votes for the midterm elections.