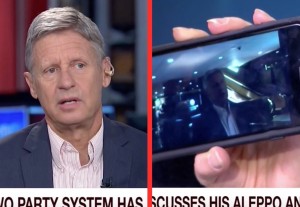 By the admission of some of the Morning Joe panelists today, perhaps it is the Vice Presidential contender Bill Weld of the Libertarian Party ticket who has a firmer grasp on foreign policy than his Presidential counterpart Gary Johnson. But regardless, Johnson asked Mike Barnicle point blank this morning, “What is Aleppo?” in an instantly viral moment that will likely spell the end of his 2016 ambitions.

The interview this morning on MSNBC started as innocently as any other that the former New Mexico Governor has been doing in this strange 2016 cycle. As the Libertarian alternative to Trump’s Republican party and the Clintonian Democratic machine, Johnson and Weld both offer executive experience as former GOP state governors in largely blue states. Johnson has been hoping to crack the necessary 15% in the polls in order to qualify for the upcoming debates.

“Maybe a little spice needs to be added to this two person race,” he offered this morning just seconds after the interview began.

Mike Barnicle began by asking questions that are fair by any third party standards: do you worry about the Ralph Nader effect, which of the two main party candidates would you end up pulling the most votes from, etc. (“I think when it ends up, it’ll end up being 50/50,” he surmised.)

Then, suddenly, a pivot from Barnicle to foreign affairs, perhaps on the heels of last night’s Commander in Chief Forum on NBC: “What would you do if elected about Aleppo?” The question was asked at 7:47 a.m. EST.

It marked the beginning of the end of the Johnson-Weld ticket.

Although the exchange was barely an hour ago, in the world of lightning-fast political media Twitter, that might as well be an entire news cycle. As of this writing, the soundbite is already everywhere; Johnson replied with a blank stare and a clueless curiosity, “What is Aleppo?”

After the conversation eventually moved on following Barnicle’s clarification about the Syrian city at the epicenter of the refugee crisis, Bloomberg’s Mark Halperin caught up with the former New Mexico Governor in the distinctive hallway of 30 Rock minutes later, shortly after 8:00 a.m. EST.

Halperin busted out his iPhone for an impromptu interview with the gaffe master that Mika Brzezinski broadcasted on air. “Is it a gotcha thing? Should you have known it? In retrospect, do you know it?” Halperin pushed.

Brzezinski aired the footage from Halperin’s iPhone at 8:05 a.m. EST, eighteen minutes after Barnicle hit him with the opening doozy.

“Well, sure it should!” responded Johnson bizarrely.

And with that, the Live and Let Live party for 2016 has likely sung its swan song. In the age of viral clips and moments that can be teed up, sent out, remixed, and skewered within minutes, Johnson’s blooper is the hand-delivered stuff of gaffe gold. You don’t need to know much of what came before it or after it for the full impact of the moment, and I suspect we’ll see that question live on into presidential perpetuity… probably not the type of spice that Gary Johnson was looking to add to this race.