James Carville: Rick Perry Is ‘In Over His Head’ And ‘Incapable Of Running For President’
video

James Carville: Rick Perry Is ‘In Over His Head’ And ‘Incapable Of Running For President’ 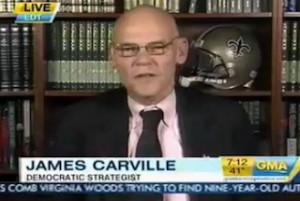 Democratic strategist James Carville appeared on Good Morning America this morning to assess the current crop of front runners in the GOP presidential field and was not shy in his both predictable and entertainingly harsh criticism of his ideological foes. Herman Cain and Mitt Romney were both targeted, but it was Texas Governor Rick Perry, who has seen a rather enormous dip in recent polls, that received the most merciless review.

In Carville’s purview, Romney isn’t so much a “flip-flopper” but more of a “a serial wind sock” adding “every time you turn around, it’s something else.” On Herman Cain, Carville declared that he “is not going to be the Republican nomination for president,” before calling him a “national distraction,” which might be a welcome one in the middle of this “horrific recession.”

But he saved the best/worst for Perry, saying of the one time belle of the GOP ball “The best thing Rick Perrry can do for himself and his friends and family is get out of the race and go back to Texas, adding “this man is evidently not up to this. He had plenty of chances to do it. He can’t debate. He can’t give a speech. He can’t hold a position paper. He can’t go on television….he’s in over his head.”

GMA host George Stephanopoulos served as a sort of straight man for Carville’s partisan punditry that likely reminded many viewers of the typically non-partisan ABC News offering that these two worked hand-in-hand in Bill Clinton‘s campaign and administration. Since tephanopoulos never really challenged Carville on his take — and there was never an opportunity given to a dissenting point of view — this segment is sure to give rise to the predictable charge of “liberal media bias” (thunder crack!)

Watch the clip below, courtesy of ABC News: