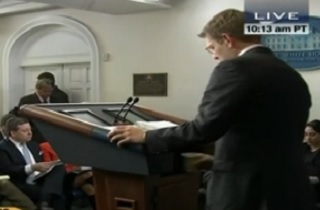 The Ryan budget has come under fire, even from Fox News’ Chris Wallace, for resurrecting the idea of repealing Obamacare, even as it retains much of the savings and revenue from the law. Like every previous Ryan budget, it also gives Republicans the chance to stand, anew, for the voucherization of Medicare. Also like previous Ryan budget, there are those who seek to give Ryan credit just for having one, no matter how bad.

That’s the premise that Fox’s Ed Henry began with. “In terms of the Ryan budget,” he asked Jay Carney at Tuesday’s briefing, “how can you attack the Ryan budget when you are standing here without an Obama budget?”

Those two facts don’t really connect, of course. It’s like asking how you can criticize Paul Ryan for crapping his pants, when you haven’t even finished digesting your food. Still, the question seems to have worked, as Carney replied that he “appreciated” the question, and that “The President will be putting forward a budget in the next several weeks, probably the week of April 8th, I would expect.”

The revelation was the rare bit of actual news that jars loose during a briefing, and caused murmurs from the rest of the reporters.

Carney continued, “But as you know, Ed, the President has put forward a proposal that will be reflected in his budget and the principles will be reflected in his budget. And that proposal, as you know, because you covered it, that he made to the Speaker of the House demonstrated his willingness to find common ground with the Republicans on both revenue and entitlement cuts, demonstrated his seriousness of purpose, demonstrated his belief that balances is essential in our pursuit of deficit reduction. And that offer has been on the table ever since he made it to the Speaker. And sadly, the Speaker has not taken it up. In fact, he declared he would never negotiate with the President again, which was a rather stark proclamation.”

“I’m glad you mentioned the President’s proposal,” Henry said. I”t is on the White House website, as you said many times. I printed it out to make sure I have it. Last question on this — it says, for example, this is the President’s proposal to Speaker Boehner, $100 billion in cuts to defense discretionary spending. As you understand, that’s not really a budget, though, because we don’t know where the $100 billion in cuts will be. Which programs of the Defense Department does he want to cut specifically?”

“Well, I appreciate the opportunity to provide the budget in advance,” Carney replied, “but we have provided…”

“The other budgets are being put on the table this week,” Henry interjected.

Carney then compared the level of specificity in the President’s plan, which isn’t a complete budget, with Ryan’s supposedly detailed budget plan.

“Have you looked at the Ryan budget?” Carney asked Ed. “Can you find a single item in tax reform, a single loophole closed to achieve $5 trillion — $5 trillion! That’s a lot of money. Not one. I would challenge you to find any entitlement reform in the Ryan budget beyond the adoption of the President’s –”

“We will invite Paul Ryan to come here and defend his plan,” Ed interrupted. “However, the President’s plan is…”

Talk of the competing budgets, from Paul Ryan, the Senate Democrats’ plan that’s due Wednesday, and now President Obama’s early April budget, dominated today’s briefing. The White House has been careful to cushion its opposition to Ryan’s budget in as conciliatory a tone as possible, but aside from pulling out a due date for the President’s budget, Ed Henry also seems to have succeeded at getting Jay Carney to bare his fangs a little.