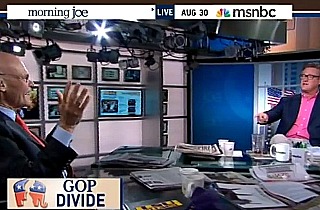 On Friday’s Morning Joe, the hosts and guests of the program argued over the direction the Republican Party needs to take in order to become a viable national party again. The conversation veered from what important traits a GOP presidential candidate should have to whether Joe Scarborough himself embodied those traits. Democratic strategist James Carville argued that Scarborough was too moderate for his party, but Scarborough disagreed. He said that a few “Cheeto crunchers on blogs” dislike him, but he more often hears Republicans praise him and “thank God” for his commentary.

The Morning Joe panel began by discussing how Bill Clinton saved the Democratic Party in the 1990s by moving to the center. They wondered how Republicans could internalize those lessons and apply them today.

Scarborough said that the faction of the Republican Party that wants to “blow up every building in Washington” is not representative of the GOP as a whole.

“These guys do not consider you one of them,” Carville informed Scarborough.

“I can tell you, there are a couple of Cheeto crunchers in basements in their underwear in their mom’s basements on blogs may not care for me, but I can tell you when I walk through airports, when I go to little league ball games, when I go shopping, I’ve got republicans coming up to me hugging me going, ‘thank God, thank God,’” Scarborough countered.

Carville cited RedState blogger Erick Erickson as someone who does not like Scarborough’s vision for the future of the GOP. Scarborough countered that Erickson does, in fact, like him.