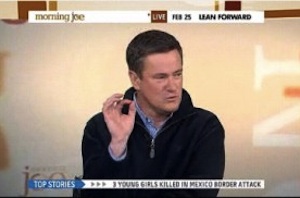 Scarborough conceded that “Roger” (as in Roger Ailes, Chairman of Fox News Channel) knows what he’s doing probably better than anyone else working in cable news, but that, eventually, enough is enough. He bolstered his argument by quoting a piece that conservative Peter Wehner, whom Scarborough describes as “Karl Rove’s brain,” penned for Commentary magazine, titled “The Most Disturbing Personality on Cable Television.” The crux of the article, basically, is that Wehner finds Beck’s tendency to “paint the world in conspiratorial terms” as something which devalues the rational aspect of political discussion or commentary and creates unproductive emotional responses like helplessness. Scarborough adds that this sort of response inspires people to “act out” in irrational ways out of fear or frustration.

Morning Joe political commentator Pat Buchanan, also a conservative Republican, weighed in by noting that he does not agree with Beck’s attempt to connect union protests among American workers to the social and political unrest in the Middle East. He then said that conservatives have a “responsibility and a duty” to keep an eye on those who would seek to misrepresent them, or represent them poorly – a thought also recently espoused by Karl Rove.

Watch the clip, courtesy of MSNBC: