Joe The Plumber Rips CNN’s Zoraida Sambolin For ‘Gotcha’ Questions: ‘This Is TMZ, Not CNN!’
video

Joe The Plumber Rips CNN’s Zoraida Sambolin For ‘Gotcha’ Questions: ‘This Is TMZ, Not CNN!’ 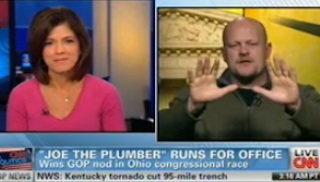 On the heels of his victory in a Ohio Republican congressional primary, Samuel Wurzelbacher (a.k.a. “Joe The Plumber“) appeared on CNN’s Early Start and got into a heated exchange with anchor Zoraida Sambolin over his past statements on not allowing gay people around his children.

“Have you changed your positions on this at all?” Sambolin questioned.

“So this is TMZ, this isn’t CNN, is what you’re saying?” Wurzelbacher asked.

“Of course it’s CNN! These are things that you said, that I would like to know if you still stand by them or if you have changed your positions on them,” Sambolin pressed. “Do you stand by these comments?”

“Listen, in my dictionary, and everyone’s dictionary from the 1970s, the word queer did mean strange and unusual. There was no slur to it. Do you challenge that?!” Wurzelbacher asked. He and Sambolin argued over the context of the question and its meaning before Wurzelbacher concluded, “Come on, you’re trying to do a ‘gotcha’ moment, it’s quite obvious.”

Following his contentious appearance on CNN, Wurzelbacher told Politico’s MJ Lee he was fed up with the media gotcha games:

“I’m sick of the gossip and drama. There’s real issues to work on. They want to take anything they disagree with me on to use it to twist it and use it to their gain and paint me in a in a light they want to paint me in,” he said. “Let’s … stop with the seventh grade shenanigans.”

Watch Joe The Plumber and Sambolin go at it below via CNN: