John King USA Guests Take On Siri’s Abortion Issue: This Is More Than Just A ‘Glitch’ 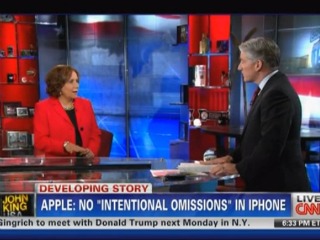 Thursday evening, CNN’s John King reported on the Saga of Siri. For those of you who require a recap: Siri is the personal assistant the iPhone 4 uses to help you answer your questions, find directions, make you feel loved, etc. Siri’s inability and/or apparent unwillingness to provide information about nearby abortion facilities caused a flurry of media attention, culminating in Apple CEO Tim Cook coming forward to say that these omissions were not intentional, and that the company will continue to work on Siri as they bring the service “from beta to a final product.”

King had someone test things out in his DC-based studio, discovering that, as has been reported, Siri gave information about two centers several dozens of miles away, neither of which happened to be the closest to the studio. Then, someone in San Francisco asked if there were any abortion clinics in the state, only to be told that Siri could not find any.

Murphy, for her part, believes this is more than a mere “glitch,” adding that “we shouldn’t have women’s issues stigmatized by software and technology providers.”

Cringely, meanwhile, believes that the issue wouldn’t be the fault of Apple but, rather, of Yelp, the platform that provides data for Siri to mine.

Simon noted that, if you ask Siri for an escort service, the technology will provide you with information about just that. (We tried a similar experiment: When we asked Siri for a brothel, it gave us info about escort services.)

Murphy then suggested that Siri’s responses aren’t the result of attempting to promote socially conservative ideals across the board but, rather, have more to do with an issue with contraception and abortion specifically.