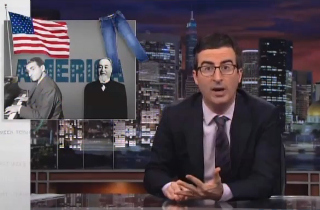 “Immigration is the universal crazy maker,” Oliver asserted, before playing clip after clip of European nativists railing against “foreigners,” and the “others” who have populated their countries. “And believe me, I know. I come from England. Hating immigrants is one of our national pastime,” he joked.

America, on the other hand, has been a historical beacon for immigrants around the world. “‘God Bless America’? written by a Siberian,” Oliver noted. “Levi’s jeans? A Bavarian. The White House? Designed by an Irishman. Superman? A Kryptonian, who was co-created by a Canadian.”

And yet, many Americans oppose comprehensive immigration reform or loosening of restrictions out of a variety of fears, or, as Oliver said:

A lot of opinions unsupported by documentation. Let’s call them undocumented opinions, which have flooded all over this country threatening the American way of life. If only we could build some kind of barrier to protect ourselves from them. A fence, if you will, of facts.

On Sen. Jeff Sessions‘ (R-AL) claim that immigrants take jobs from unemployed Americans, Oliver corrected: “It’s not true, but it feels like it might be.” (For more on the labor myth, see here.)

On Rep. Steve King‘s (R-IA) assertion that immigrants are mostly drug smugglers with “calves the size of cantaloupes” (haha, remember that?), Oliver cited the preponderance studies that show immigrants aren’t so prone to crime as nativists think. “Just relish for a moment of how he poetically presented that bigoted bullshit,” Oliver added.

And then, on perhaps the most persistent argument that continually clouds the immigration debate — that Obama supports reform because he “knows” it’ll result in more Democratic voters, a.k.a immigrants — Oliver said: “What if you just started treating them better?” (Keep in mind, however, that the Dems don’t have much better a record.)

But perhaps the most effective mockery of the anti-immigration crowd came from Oliver’s reworking of the animated children’s movie classic, An American Tail, updated with a more honest portrayal of our modern immigration system.

Watch the full takedown below, via HBO: