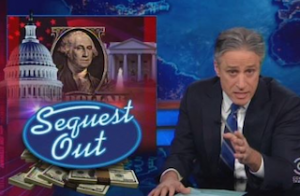 Jon Stewart launched a new week of The Daily Show Monday night with full coverage of the “mutual ball punch” that is the sequester, from President Obama‘s press conference sci-fi gaffe to the mainstream media fail that followed.

Stewart lamented the fact that Congress couldn’t get their act together and come up with a way to avoid the automatic spending cuts. “Congress, as always, in its infinite wisdom, forgot just how fucking incompetent they really are.” He followed up that assessment with an elaborate “auto-erotic asphyxiation” metaphor. “Everybody thinks they can pull it off, until they can’t.”

He then focused in on two major gaffes made in the aftermath of the failed negotiations. First, President Obama mixed up the Jedi mind trick from Star Wars and the Vulcan mind meld from Star Trek. Then, Speaker John Boehner called taxation “theft.” He added, “I wonder which one of those will get more widespread attention.”

But the aspect of this whole story that really got under Stewart’s skin was the fact that Congress’ salaries are exempt from being cut under the sequester. “There are worse penalties for fucking up on Top Chef,” Stewart exclaimed, “than there are in Congress.” Bringing it back to auto-erotic asphyxiation once more, Stewart adjusted his metaphor a bit, concluding that “we’re the ones blacking out, while they’re all still jerking off.”