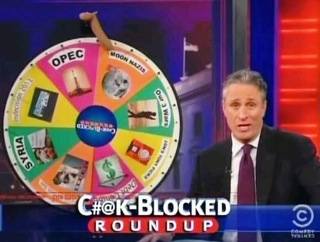 That’s depressing, so Stewart gave the dildo another shot, but that only landed him in Syria, where repressive tyrant Bashar al-Assad has been on somewhat of a killing spree. Stewart finally got less where presidential candidates have been “wrestling with Anthony Weiner‘s penis for airtime.” Among those was Tim Pawlenty, who went out of his way to tell every region in America that whatever they were doing was wrong for them (say, telling Iowans he would take away agricultural subsidies and telling Floridians Social Security needed to be cut), and Herman Cain, who is on a campaign to limit bills to three pages.