Jon Stewart On GOP Candidates: ‘In The Race To Be The Craziest, There Can Be Only One’
Video

Jon Stewart On GOP Candidates: ‘In The Race To Be The Craziest, There Can Be Only One’ 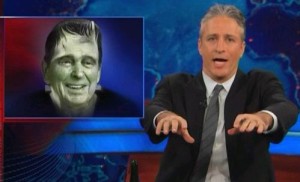 On Thursday night’s edition of The Daily Show, host Jon Stewart took a look at the GOP candidate field, starting with Mitt Romney, the “uncontested front-runner for everyone’s second choice.”

Stewart showed that, from this time last year, Romney has kept his position in second place across various polls as a veritable carousel of candidates take, and then ultimately leave, the top spot. But “how has he managed to neither gain nor lose steam,” Stewart wondered, even as he has changed his stance on various issues? “If he were a color, he’d be beige. If he were an ice cream flavor, he’d be beige,” the host joked. That’s no black walnut, guys.

RELATED: Chris Matthews: Republicans ‘Don’t Have A Thrill Up Their Leg’ For Mitt Romney

Cut to several notable quotables by Herman Cain, which caused Stewart to reason that, really, Romney is in a position where he doesn’t have to say anything in order to eventually come out ahead against his less filter-reliant competitors.

As for Rick Perry, the man Stewart described as looking as if he’s perpetually posing for a box of “Just for Men” hair coloring? Having a tax plan that’s one digit less than Cain’s is a step in the right direction.

Have a look, via Comedy Central. :