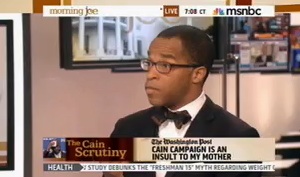 Washington Post columnist Jonathan Capehart appeared on Morning Joe to discuss his recent article where he claimed Herman Cain‘s campaign was an insult to his mother, writing that people of color had to work “twice as hard” and Cain denigrated the high level of expectation and preparation demanded by his mom. He then suggested that white Republicans feared making critical comments towards Cain because of his race.

Capehart opened by asking “Why is it that Herman Cain is not being criticized? I have to tell you, I wonder if there are Republicans, white Republicans, who are just afraid to criticize a black candidate for president. And I have to say, and I say it with a hand grenade, I have to say, we’re talking about President of the United States! We’re not talking about some piddly position. He needs to be held accountable. If he does not know that China has nuclear weapons, if he makes jokes about border fences!”

“In the Charlie Gibson interview, there was a question about the Bush Doctrine,” explained Scarborough. “I was aware of the Bush Doctrine day in and day out and I listened to it, and I thought, do you know what, I think she pretty much nailed it. For the next week, there is a huge debate, did Sarah Palin blow the question on the Bush Doctrine? And yet, by that standard, Herman Cain shouldn’t still be in the race. Herman Cain is apparently living by a standard that other Republicans and Democrats don’t have to live by.”

Watch Capehart’s analysis of Herman Cain below via MSNBC: