Journos From Both Sides Slam Chris Cuomo’s Glowing Interview With Brother Andrew: ‘This Is So Gross and Embarrassing’ 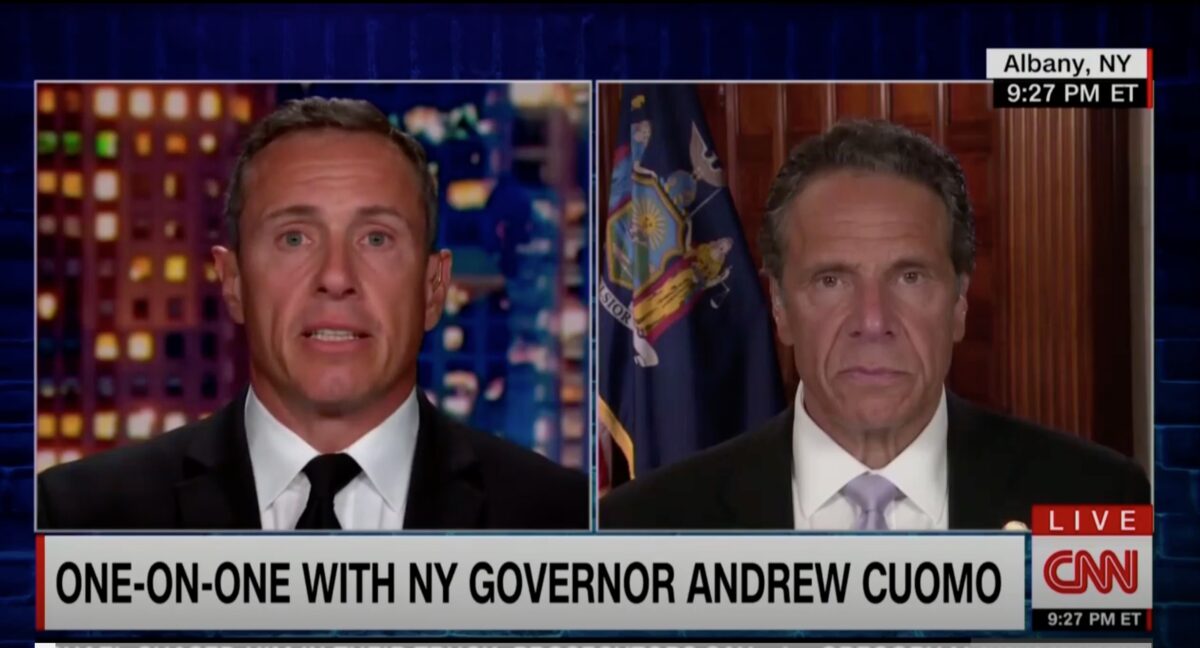 CNN has faced criticism before — including on this site — for the gabfests between anchor Chris Cuomo and his brother, New York Governor Andrew Cuomo. That criticism ratcheted up following the duo’s latest interview on Wednesday — a remarkably chummy affair which was torn apart by commentators on both sides of the aisle.

For months, CNN has allowed Cuomo to interview his brother on his response to the coronavirus despite the obvious conflict of interest their interviews entail. While this might have been good for ratings, the Cuomo-on-Cuomo interviews have been decried as an affront to journalistic integrity — and clearly have not always been handled with the seriousness an ongoing pandemic requires.

Chris Cuomo hosted his brother again on his show Wednesday night, and he acknowledged the ethical complications of the conversation while briefly asking the governor how many people died in nursing homes under his watch, before moving on. The CNN host also admitted “I’m not objective” and largely gushed over his elder brother’s performance during the show, before bringing the interview to an emotional conclusion.

His elder brother has indeed earned good press coverage. But New York, the state he runs, has more deaths from coronavirus than any other state — by far. The CNN host was called out for an interview that failed to treat that fact as the news it is.

The luv guv’s brother did ask about the nursing home deaths, but @NYGovCuomo rambled on and blames everyone else for his mistakes. @ChrisCuomo “forgot” about the order that forced Covid patients into homes that had his brothers name on it. pic.twitter.com/0xguu7wLDu

This is one of the most embarrassing and self-destructive things I’ve seen a news outlet do. I doubt even North Korean State TV would allow an anchor to “interview” his own brother and use their airwaves to declare him a Great and Noble Leader. Dynastic political power + StateTV: pic.twitter.com/nuMgSXYAnl

this is so gross and embarrassing https://t.co/CO2YwajfT4

Cuomo thinks we’re all as stupid as he is, that we’ll just collectively forget what we’ve been seeing with our lying eyes https://t.co/trvVnwGYJJ

It’s nice that there’s really no debating at this point whether CNN’s 9 pm hour is an extension of Andrew Cuomo’s political machine https://t.co/wkZ7pT1R7k

It remains astonishing that CNN thinks it’s appropriate for the governor of New York—who has presided over more than ten times as many deaths as Florida, a more populous state—to be interviewed as a matter of course by his own brother. And now this. https://t.co/cwLN5Rd3Vu

remember that pathetic and desperate interview between don jr. and his dad? yeah well umm this isn’t that exactly but yeah um it also sort of is? https://t.co/vohgp8kSyr

Way more people have died in New York from coronavirus than in any other state, and a significant part of that is b/c of Andrew Cuomo’s bad response early on in the crisis & his order that nursing homes must accept COVID-19-infected patients. Yet CNN openly propagandizes for him. https://t.co/36nyETOGrd

This is so divorced from reality. NY did so much worse than every other state. Governors with hospitalization rates one fifth of Cuomo’s, are held up as monsters by the same folks who lionize Cuomo. https://t.co/QfsVwPhMkO

Only four countries (including the U.S.) have as many Coronavirus fatalities as the state of New York. https://t.co/adWpECgx1a

Baffling that CNN keeps allowing the Cuomo interviews Cuomo thing. It’s so clearly a bad idea. It’s been roundly and justly ridiculed across the political spectrum, and gives credence to every complaint about media elitism and bias. And yet they just keep doing it.