The Chris Cuomo-Andrew Cuomo Interviews Are Funny and Informative, But for the Sake of Journalistic Integrity They Need to Stop 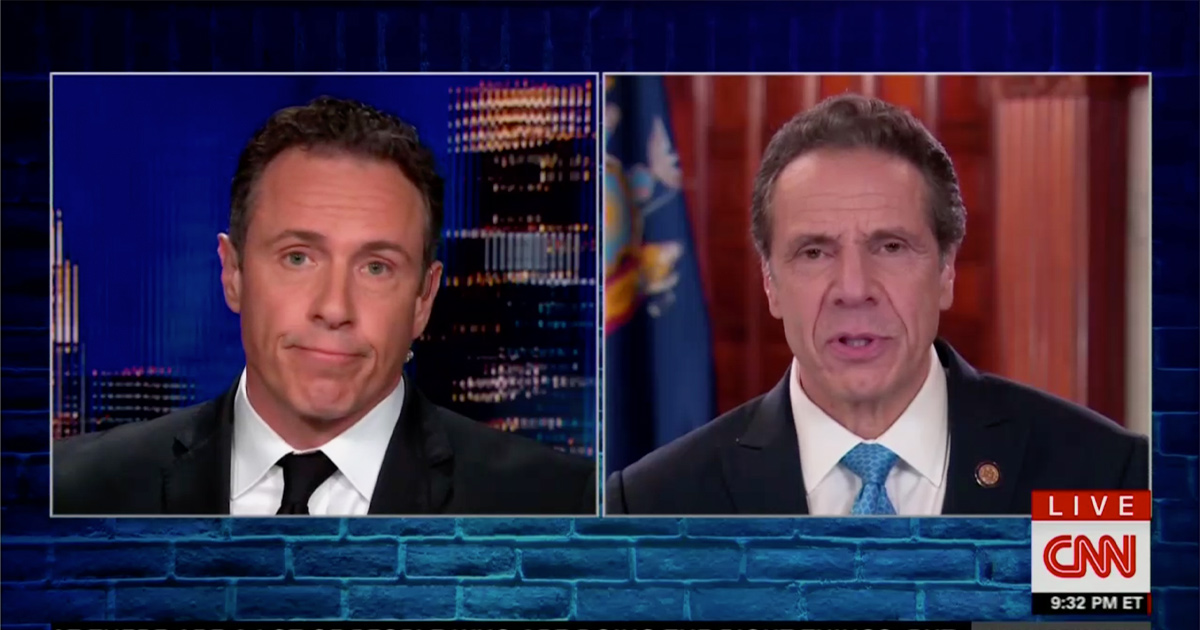 Governor Andrew Cuomo (D-NY) has become a national figure in recent weeks — and a popular one, at that — for his handling of the coronavirus outbreak in hard-hit New York. During that time, he’s given a series of interviews to his brother, Chris Cuomo, on CNN. The lighthearted yet probing chats between the two have dually illuminated and entertained. The banter comes off a little forced, at times. Overall, though, the public has been better informed as a result of these interviews.

But following the latest conversation between the two on Monday night, Dan Zak of the Washington Post voiced this sentiment:

I simply do not understand how a media outlet — that takes itself seriously — allows a journalist to interview a public official who is his brother, regardless of how dispassionate or rigorous the journalist is. I know some of you find it amusing but come on.

He is absolutely right.

The conflict of interest couldn’t be more clear. Chris Cuomo and Andrew Cuomo are brothers. They appear to be close. For the sake of journalistic integrity, their interviews need to stop.

Chris is known for a highly combative approach to his interviews. His rancorous one-on-ones have become a prime time cable news staple. The fiery showdowns between Chris Cuomo and Kellyanne Conway have featured some of the most contentious exchanges ever broadcast on cable news.

Could you ever see Chris Cuomo engaging his own brother in a knock down, drag out battle like those he’s had with Conway?

Of course, there’s less of a call for Chris to go to the mat with Andrew when the New York governor’s approval rating on the coronavirus crisis stands at 87 percent. But what happens if that number falls a bit, and the governor of the Empire State comes under more public criticism? Could Chris Cuomo possibly get as tough with his own brother as he did with the likes of Kellyanne Conway?

The professionalism of Chris Cuomo is not being questioned in this space. Part of the reason that there haven’t been more calls for these interviews to end before now is that Chris has done a thorough job. During their March 23 conversation, Chris demonstrated his willingness to ask Andrew an uncomfortable, necessary question when he called out his brother for being too reluctant to defy President Donald Trump.

“I’ve heard you be deferential to the White House,” Chris said, adding that he wanted to hear some “straight talk” on his dealings with the Trump administration.

“I always do straight talk,” Andrew replied. “And I would disagree with your use of the word deferential.”

But then, there was this odd exchange during Monday night’s conversation, in which Chris grilled his brother about having presidential aspirations.

Chris: With all of this adulation that you’re getting for doing your job, are you thinking about running for president? Tell the audience.

Chris: No, you won’t answer?

Andrew: No. I answered. The answer is no.”

Chris: No, you’re not thinking about it?

Andrew: I answered the question. Sometimes it’s one word. I said no.

Chris: Have you thought about it?

Chris: Are you open to thinking about it?

Chris: Might you think about it at some point?

Chris: How can you know what you might think about at some point right now?

Andrew: Because I know what I might think about and what I won’t think about. But you’re a great interviewer, by the way.

Chris: Appreciate it. Learned from the best.

Plug the names Sean Hannity and Donald Trump Jr. into that transcript, and there is little question that journalistic watchdogs — rightfully — would be up in arms. Yes, it was a fair line of questioning. Yes, the topic had news value — particularly with Andrew Cuomo currently being rated by a major prediction market as having a better chance to win the nomination than Sen. Bernie Sanders (I-VT). But the fact that Chris and Andrew Cuomo are brothers opens exchanges such as that one up to unfavorable interpretations. The two brothers may have had the purest of intentions, but the clear conflict of interest makes the question — Was Chris trying to prop up his brother as a presidential candidate? — entirely reasonable.

I interviewed Chris Cuomo for a profile piece in 2017. During that conversation, he explained his gladiatorial interview style.

“I throw punches at whoever is in front of me and it’s their job to deal with the punches,” Chris said. He added, “And if people want to fight, I am a fighter.”

There is no doubt that Chris and Andrew got into a few tussles with each other when they were boys. There is also no doubt that Chris is willing to unleash some stinging jabs at his brother even now — we’ve seen proof of that in these recent chats. But if duty demands that Chris Cuomo deliver the knockout punch, how could he possibly be expected to ever throw it?

Joe DePaolo is a Senior Editor for Mediaite