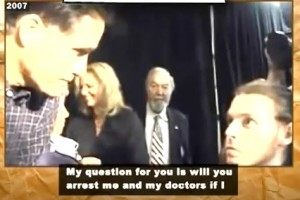 As it becomes ever more clear that Mitt Romney will likely be the Republican presidential nominee, the former Massachusetts Governor’s opponents will continue to mine the interweb for rich deposits of oppo ore. On Monday night’s Countdown, host Keith Olbermann reintroduced America to Clayton Holton, an 80-lb medical marijuana patient who had an encounter with Romney in 2007 that would make a tauntaun reach for a sweater (translation for non-dorks: it was mighty chilly).

Holton is a 23 year old who suffers from Duchenne Muscular Dystrophy (DMD), which, as he explained to Gov. Romney when he met him in New Hampshire during the 2008 presidential campaign, is a rare form of the disease. He also explained to Romney that his five doctors all recommended that he use medical marijuana, which helps to relieve his pain and stimulate his appetite, and asked if Romney, as president, would have him or his doctors arrested.

Gov. Romney starts off by raising the issue of synthetic marijuana, which Holton says makes him vomit. Romney says “I’m sorry to hear that,” but he may as well be apologizing for a bowl of cold soup.

“I’m not in favor of medical marijuana being legal,” Romney concludes, and as Holton tries to press Romney for an answer as to whether he would enforce that position by arresting doctors and patients, Romney has already moved on to pressing the flesh. When a bystander asked Romney why he didn’t answer Holton’s question, Romney wheeled and curtly replied, “I spoke with him.”

Now, Romney supporters would probably call this encounter manipulative, and as the guy hectoring Romney with “You’re just going to ignore a person in a wheelchair?” indicates, they would be right about that, to some degree. Olbermann, for his part, never even bothers to identify Clayton Holton by name.

However, there is a human face to almost any policy, and a candidate for high office needs to be able to defend political positions to those human faces. If Romney’s position protects some greater good, then he ought to be able to articulate it, especially in a situation like this.

It’s worth noting that the Obama administration has been criticized for sending mixed messages on medical marijuana, At Clayton Holton’s NH Compassion page, there are links to videos of his encounters with other 2008 presidential candidates like Hillary Clinton, John McCain, and John Edwards. Unfortunately, there isn’t one for then-Sen. Barack Obama; it would be interesting to see how he would handle such a question now.

However, the President’s actions on this issue are still far and away more progressive than the current crop of Republican candidates (except Ron Paul), one of whom (Newt Gingrich) once proposed the death penalty for quantities of marijuana equal to a carton of cigarettes.

As a minor side note, I noticed, when searching for this clip, that the clip posted at Current’s website is significantly edited, clocking in at 3:14, out of the Worst Persons segment’s full running time of 4:42, but the site doesn’t disclose that fact. That seems like an odd way to promote content, especially from the network’s flagship program.