Kirsten Powers On Fox News: ‘Democrats Cower In Fear’ To The Power Of The NRA
video

Kirsten Powers On Fox News: ‘Democrats Cower In Fear’ To The Power Of The NRA 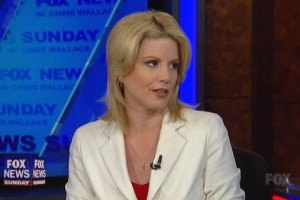 The panel on Fox News Sunday today discussed the issue of gun control, and if it would be an effective response to the movie theater shooting in Colorado two days ago. Liz Cheney argued in favor of the individual’s right to bear arms and against gun bans, while Kirsten Powers noted that the Democrats dropped the ball on this issue because of the power and influence of the NRA.

Cheney argued that gun bans are unconstitutional, and a more effective way of preventing tragedies like this would be behavioral monitoring to see who would be likely to “snap,” although she did admit there was very little in James Holmes‘ background to give people warning signs.

Wallace asked Powers about the issue, and she noted that the assault weapons ban was flawed because of all the loopholes in it. She argued that it’s easier for crazed gunmen to shoot more people when they have semi-automatic weapons as opposed to a handgun. Powers also claimed police departments all across the country oppose assault weapons, and to rebut the constitutional argument, she said that “there are some limits of our freedoms.”

Cheney shot back by saying that the Century 16 theater had rules against bringing guns into the theater, suggesting a rule like that may be unconstitutional, to which Powers asked her if it would be within someone’s constitutional rights to get in their own hands any firearm that can be used by the military, no matter how deadly. Cheney answered, “the Supreme Court has spoken about the individual right to bear arms,” but said there needs to be a balance with individual protection.

Turning to the political side of the argument, Wallace noted the Democrats have not been very vocal in speaking out in favor of gun control, highlighting poll numbers showing support for gun control has dropped drastically in the past two decades. Powers pointed to the NRA as one of the main reasons why the Democrats aren’t doing more on guns.

“The gun control organizations… own the Congress. They own the Republicans and the Democrats cower in fear.”

Bill Kristol agreed with Powers, saying that while he believes in an individual right to own a handgun, he draws the line at semi-automatic weapons, and the Democrats could get more support on gun control efforts if they make that distinction.