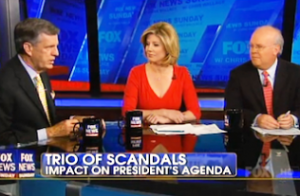 In light of the controversies facing the Obama administration (Benghazi, IRS, AP vs. DOJ), some of the president’s critics have felt the issues undermine the “big government” ideology of the left. The topic made its way to Chris Wallace‘s panel on Fox News Sunday panel this weekend, where Kirsten Powers begged to differ.

To that point, Brit Hume noted that the administration’s defense in each of the scandals has basically been to argue incompetence and note that they screwed up. That is exactly what undermines the big government argument that forms the “core” of liberalism.

“When you have simultaneously three scandals affecting different agencies of government, different people, and the White House — and it’s all chalked up to bungling — it really diminishes the argument for that side of the political divide,” Hume contended.

Powers wasn’t buying it. Agreeing with the president that the government can be a force for good, she countered, “I don’t think any of this is an argument against liberalism.”

“These are all — it’s bad behavior by people in the government,” she added, citing Benghazi as an example. “This is specific to the administration mishandling something.”

She further pushed back against the chatter about the IRS’ involvement in Obamacare, noting that it’s not expansive and doesn’t mean the agency will be overseeing our health care.

“It’s a narrative that will work with people who want that to be the narrative,” she argued. “When Obama came in, there already was no trust in the government. … He was coming in already with a very, very heavy lift.”