Krauthammer Clashes With O’Reilly Over U.S.-Cyprus Link: Unless Dems Rule ‘Until The End Of Time,’ You’re Wrong 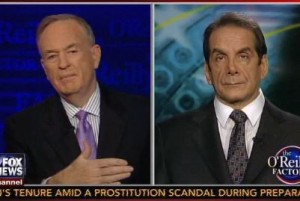 Bill O’Reilly brought Charles Krauthammer on to speculate on whether the U.S. government is slowly heading into the same territory as Cyprus, where money is being pulled from bank accounts and the banks are closed to prevent a run on deposits. Krauthammer was only slightly more optimistic than O’Reilly, who declared that if the U.S. continues on the same road, it might lead to financial “armageddon.”

O’Reilly and Krauthammer discussed the crisis in Cyprus before getting around to O’Reilly’s concerns that we are “seeing the future” for the United States in Europe. He said that he’s not one to hammer Obama over “every little thing, but this is a big thing.” He accused the president of encouraging conditions similar to Cyprus in the United States and not caring about the debt.

Krauthammer clarified that unlike in Cyprus, U.S. banks are in “pretty good shape,” and claimed that pursuing entitlement reform and “reigning in the government” would let the United States reach solvency in a few years. O’Reilly rebutted that the United States is in tough economic shape and if money keeps being printed, “that is going to lead to armageddon.”

O’Reilly warned that Cyprus could lead to a domino effect in other nations that would create global panic. Krauthammer disagreed with O’Reilly, pointing to “record highs” on Wall Street, but O’Reilly said “they’re deluding themselves into thinking” the United States is not slowly devolving into a nanny state. Krauthammer shot down O’Reilly’s theory by pointing out the Republicans could easily take back the White House and change policy. He said, “Unless you believe we’re going to have Democrats until the end of time, your theory is wrong.”