Larry King Goes There With Barbara Bush: Asking About The “Fetus In The Jar” 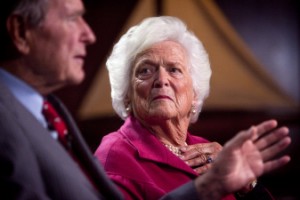 It may be one of the most gripping–or disturbing–passages in George W. Bush‘s new memoir: the tale of a turning point in young Bush’s life. As the former president tells the story, when he was a teenager, his mother had a miscarriage and proceeded to show her son the fetus, which had been put in a jar to be taken to the hospital.

Dubya says seeing the fetus awoke a pro-life passion that he ultimately carried into politics.

In an interview Monday night on Larry King Life, King mentions the story once, without getting into the personal detail, then comes back to it later in the interview:

KING: We’re back with the Bushes, who have always been so gracious to me personally and to our staff at the White House, at their home in Kennebunkport, here in Houston as well.

We’ve had a closeness that is hard to describe over these years. Spent so much time together. It’s great knowing them and talking to them and seeing them especially to me here tonight.

You also disclose, Barbara — George discloses something very personal about you, which he says you gave him special permission to write about.

He wrote that when you once had a miscarriage, you showed him the fetus in the jar.

BARBARA BUSH: No, really the truth is —

KING: We touched on it before. But we didn’t elaborate.

BARBARA BUSH: I didn’t put it in the jar.

BARBARA BUSH: It’s not in the library. No —

BARBARA BUSH: George — Paula put it in the jar. And I was shocked when she gave it to him to — but, you know, memories dim a little bit but anyway — but he was very —

KING: Were you shocked that he put it in the book?

BARBARA BUSH: No. He asked permission and I gave him permission. It’s his book. And I think he was trying to say that he and I have a very special relationship. We tease all the time, and that’s not very nice of me, but –you know you’ve got to tease a little bit. And he teases me unmercifully. But we’re very close.

KING: You had differing opinions, though, on pro-life, did you not?

GEORGE H.W. BUSH: You were never that fired up about it.

GEORGE H.W. BUSH: When I was president.

BARBARA BUSH: I wasn’t president, nor was I president when George was president. But that’s one issue. I’m not a one-issue person. I mean, I’m– I don’t believe in that and I don’t think my Georges do either. I think they try to think of what keeps America safe and what is — you respect other people’s feelings, religions, beliefs. And I do that, too.

KING: But you have your own opinions.

Though Mrs. Bush begins by saying “I don’t remember” whether she had her own opinions on abortion, she has, for many years, quietly been supportive of abortion rights, calling it a “personal choice.”

Watch the interview here, from CNN: