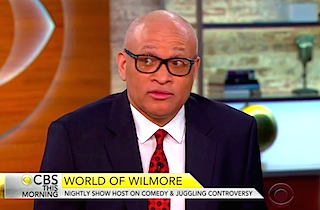 Larry Wilmore stopped by CBS This Morning on Friday and of course host Gayle King decided to use his signature “Keep It 100” tactic to elicit a reaction to the uproar over soon-to-be Daily Show host Trevor Noah’s Twitter history.

Wilmore said that because Noah is unknown to most Americans, noting that he hasn’t even met the South African comedian yet, “you have to paint a picture of him, so people are using whatever they had,” meaning years-old jokes on Twitter. “But I think once he’s doing the show, you know, I think some of those things will go away,” he added.

RELATED: Why Comedy Central Is Standing by Trevor Noah

Despite calls for his head from groups like the American Jewish Congress, Noah has mostly received support from his fellow comedians and future Daily Show colleagues.

Correspondent Aasif Mandvi called the controversy “much ado about nothing” and contributor Kristen Schaal said that if people couldn’t find anything damning in his tweets, they would have dug up something else.

In his first comments on this issue this week, Jon Stewart urged viewers to give Noah a chance to earn their “trust and respect” before judging him based on his Twitter account.