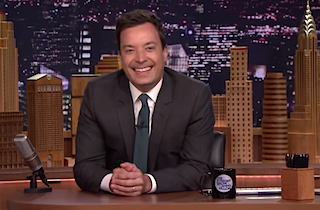 For the first time in more than a month, all three of the major network late night shows aired new episodes last week. And will all three hosts back from their various vacations, Jimmy Fallon maintained his strong ratings lead with 3.533M total viewers and a 1.11 rating in the 18-49 demo. That demo rating was better than that of Jimmy Kimmel (0.60) and David Letterman (0.40) combined.

Meanwhile, in second place, Kimmel increased his lead over Letterman from what it was a month ago. While only 28K viewers separated the two shows in mid-June, last week that gap widened to 42K. Similarly, the demo gap grew from 0.14 to 0.20.

As usual, Fallon also had the biggest viral hit of the week by convincing Morgan Freeman to talk to him while sucking down helium. That video has racked up nearly 10 million views on YouTube since last week.

And, since today’s late night viewers are not only watching on TV, here’s a look at the most popular video for each of the three shows last week on YouTube (as of Thursday, July 31):

In the 12:35pm slot, Late Night with Seth Meyers’s ratings remained relatively unchanged from a month earlier with 1.463M total viewers and a 0.51 rating in the 18-49. CBS’ Late Late Show with Craig Ferguson also remained steady compared to the previous month with 1.290M and a 0.30 rating in the demo.