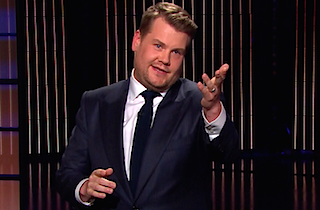 It’s been close to eight months since we last checked in on the state of the late night ratings, but with CBS’ The Late Late Show with James Corden completing its first full week last week, we thought now might be a good time to see how things are going.

As we previously reported, the often dismal ratings brought in by James Corden’s CBS predecessor Craig Ferguson meant it wouldn’t take much for the newcomer to improve the show’s standing, especially at the beginning when there is increased buzz about the revamped 12:35 a.m. slot. But it would have been harder to predict that Corden would out-rate NBC’s Late Night with Seth Meyers during his first full week on the air.

These numbers are especially impressive for Corden because of the massive lead-in advantage Meyers enjoys on a weekly basis thanks to The Tonight Show Starring Jimmy Fallon. Last week, Jimmy Fallon was far out in front in total viewers at 11:35 p.m. with 3.344 million, compared to 2.681 million for Corden’s lead-in on CBS, The Late Show with David Letterman (and 2.682 million for ABC’s Jimmy Kimmel Live).

David Letterman‘s last place standing in the demo (0.56) compared to 0.91 for Fallon and 0.61 for Jimmy Kimmel could help explain Corden’s deficit so far in that department.

During his premiere week, Corden pulled out as many stops as he could, including a star-packed opening sketch, some celebrity news-breaking with Mila Kunis, a full hour featuring Will Ferrell and Kevin Hart and more.

Corden also had by far the most-watched YouTube clip of the week with this bit in which he recreated Tom Hanks’ entire movie career in under seven minutes… with Tom Hanks:

Here’s a look at the most popular video for each of the five shows last week on YouTube (as of Thursday, April 2):

As the initial excitement factor wears off, the benefit of Fallon’s lead-in will likely lead Meyers to regain his #1 spot in total viewers. But as you can see from the numbers above, compared to Meyers, Corden is already winning the very important viral video game by leaps and bounds.

Letterman is expected to see a ratings surge during his final few weeks, which will undoubtedly give Corden some sort of boost. CBS has not yet said what will happen during the 11:35 p.m. hour between Letterman’s departure on May 20 and Stephen Colbert‘s debut on September 8, meaning the summer will be Kimmel’s time to shine. Even if he can convince less than half of Letterman’s regular viewers to tune the channel to ABC instead of NBC, Kimmel could be a real threat to Fallon’s supremacy.

As for what happens when Colbert breaks onto the scene in the fall, at this point it’s anyone guess. Will he find himself stuck in third place against the two Jimmys, who at this point are far more established in the eyes of late night network viewers? Or will he be able to pull off the unexpected and rise to the top of the heap, taking Corden along with him?

We will just have to wait and see.