Laura Ingraham Weighs In On Violence And Rape Within OWS: ‘It’s Time To Wrap It Up’ And Move On 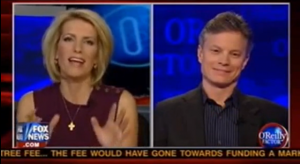 Wednesday night, whilst filling in for Bill O’Reilly on The Factor, Laura Ingraham took a look at the instances of sexual violence going on within the Occupy movement. The situation has gotten so out of hand in lower Manhattan’s Zuccotti Park, she told viewers, that women have been given their own separate area within the protesters’ so-called “tent city.” What’s more, she added, there have also been rapes of men that have gone unreported.

Ingraham was joined by David Callahan, a senior fellow at Demos, who said he was impressed with the young protesters’ commitment to the cause, particularly in a “dangerous” city like New York. He blamed the violence on “hanger on-ers” outside the movement. He then opined that Ingraham was focusing solely on the negative, sensational aspects of a mostly positive movement.

RELATED: Did Occupy DC Push This Elderly Woman Down The Stairs?

“This economy is not working for ordinary Americans,” said Callahan, “that’s what this protest is all about.” Ingraham countered him by noting that a recent Rasmussen poll has forty-four percent of Americans saying that the protesters “do not represent the mainstream.” “It’s time to wrap it up,” she concluded.

In short, it seemed the two began having one conversation — one about sexual violence and rape within a specific community — and ended up having one that didn’t address an issue that, truly, deserves to be researched and reported.

Watch the segment, via Fox News, and let us know what you think: