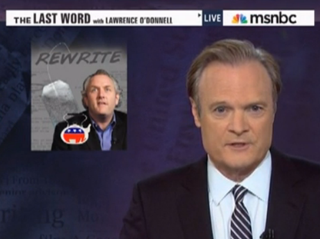 Over the weekend, Andrew Breitbart posted a profane speech he gave at a Tea Party conference attacking Rep. Nancy Pelosi and Janeane Garofalo. Many found the language inappropriate, but on tonight’s Last Word, Lawrence O’Donnell took the opportunity to psychoanalyze Breitbart as a little boy who never made it in Hollywood, taking swipes at the “honorable and decent” Garofalo out of envy.

In what was one of the longer and more personal (O’Donnell had written for Garofalo’s role in The West Wing) in a while, O’Donnell played Breitbart’s comments– that Rep. Pelosi was a “bitch;” Garofalo “Hollywood’s pity f*ck”– and let them settle for a few seconds before addressing his audience. “I know many of you are seething with hatred,” he noted, but instead advised to feel like he did: “I feel sorry for him, I really do.” “I see little Andrew Breitbart, who grew up in Los Angeles in the shadow of show business and craved getting through the studio gates,” O’Donnell narrated, “and intensely resents every other local kid who did.” For O’Donnell, this performance was “Andrew Breitbart trying to be an entertainer” and finally seeing himself “funny, entertaining, deserving of a stage, deserving of a microphone.” The Tea Party, he concluded, made him “the star he could have been if the local industry, show business, had just let him in.” “Little Andrew Breitbart is so proud of his performance that he put it on his website,” O’Donnell noted– and yes, he called him “Little Andrew Breitbart” for the entirety of the segment.

RELATED: Breitbart To Tea Partiers: ‘We Outnumber (Liberals) And We Have The Guns!’

O’Donnell then turned to defending Garofalo’s career, noting that he was “lucky” to work with her and that she was always working on multiple projects– but never out of pity, but talent. He then turned to her comments on the Iraq War and her refusal to believe in weapons of mass destruction being hidden in Iraq. Noting that even he said he didn’t know if there were, Garofalo decidedly said there weren’t any at the time, and promised to walk to the White House “on my knees over glass” and apologize– to Bill O’Reilly, no less– if she were wrong. “Janeane Garofalo may not be very tall, but she’s a big enough person to apologize when she is wrong,” O’Donnell concluded; “I wish, I really really do wish, that I could say the same thing about Little Andrew Breitbart.”

The length and tenor of the segment veered dangerously into “Special Comment” territory on some occasions, and the reference to the WMDs could be interpreted as a sign that, perhaps, had Garofalo been wrong about that, or not been as talented in her field as O’Donnell considered her, the language Breitbart used wouldn’t have been so bad (that his defense of Pelosi was notably milder also corroborates this unintended point somewhat). Nonetheless, O’Donnell’s passion and decision to publicize the display– one that many of his regular viewers, likely not being Breitbart fans, would have surely missed– makes it a worthy and memorable piece, and particularly showcases the strength that distinguishes O’Donnell among much of his competition: his writing. On his end, Breitbart took to Twitter to mock O’Donnell for “deconstruct my work without me there to defend self,” and later calling O’Donnell “cute” for “‘Selectively edit[ing]’ your report to create false impression WMDs related to my call out of execrable Garofalo.” If Breitbart is inviting himself on The Last Word to debate O’Donnell, one can only hope O’Donnell would consider– that would be a debate for the ages.