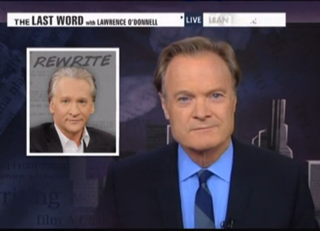 Last Friday, Bill Maher dedicated his “New Rules” segment to fighting socialism’s status as a four-letter word in America. For some who have had hands-on experience with socialist states, this was probably a rather naive stance. But self-avowed socialist Lawrence O’Donnell replayed the segment as a “guest Rewrite,” explaining that he was not a socialist exclusively (perhaps unlike Maher’s definition), but found it bizarre that many refused to accept that all governments were “mixes” of socialism and capitalism.

O’Donnell began recalling the Newsweek cover “We are All Socialists Now,” and noted that “I, of course, have been calling myself a socialist since I first read the definition of socialism in the first economics class I took in college.” But he took the time to explain that that did not mean he was in favor of a fully socialist economy, because that was not possible. “There is no capitalist economy anywhere in the world and there is no socialist economy anywhere in the world,” he argued, “not even Cuba… we are all mixes.”

He did not bother to name a single capitalist feature in the Cuban economy, though the tourist-only Havana hotels may, in some skewed way, count. Instead, he gave China as an example of the middle ground: “China has a lot more capitalism than Cuba, but a lot more socialism than the United States.” And, for good measure, gave an example of a type of socialism he hates: agriculture subsidies. “I’m a socialist, but I hate bad socialism,” he noted, “and there is plenty of bad socialism out there.”  He concluded he was “as much as a capitalist as I am a socialist,” and that the stigma the word has in American culture was undeserved. Then Maher took it away with his “It Gets Better” segment.