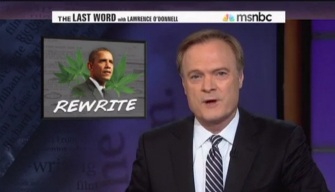 During Thursday’s edition of The Last Word, host Lawrence O’Donnell described how President Obama has significantly rewritten his position on the decriminalization of marijuana since becoming president.

O’Donnell re-told the story of how at the Summit of the Americas two weeks ago, Colombian President Juan Manuel Santos told Obama that “the war on drugs is a failure” and that we should move toward the decriminalization, if not legalization, of marijuana and possibly cocaine. O’Donnell then reminded the audience of Obama’s dodgy response, in which the president said:

I think it is entirely legitimate to have a conversation about whether the laws in place are ones that are doing more harm than good […] And my administration’s position is that legalization is not the answer. Nevertheless, I’m a big believer in looking at the evidence, having a debate.

“Notice,” O’Donnell said, “that President Obama referred only to his opposition to legalization of drugs, but Juan Manuel Santos had urged President Obama to also consider decriminalization.”

It’s a telling move by the president to completely dodge the decriminalization suggestion. And O’Donnell said that this stands in stark contrast with a 2004 clip of Obama’s pre-senatorial remarks on the subject:

The war on drugs has been an utter failure. We need to rethink and decriminalize our marijuana laws. But I am not somebody who believes in legalization of marijuana.

This shows that the president has favored drug decriminalization and completely understands the case for it. But, O’Donnell said, the president is “unable to say that while in re-election mode,” because “presidencies inhibit free speech in presidents.”

That’s exactly right. This reminds me of what public choice economists (nerd alert!) call the “median voter theorem.” Politicians pander to an undefined “center” of the political spectrum in order to get elected or re-elected. It is exactly why you see President Obama walking back his position on marijuana decriminalization. It is also why the president has abandoned his pro-gay marriage position of his pre-political career.

The fact that politicians must pander to the “median voter” also explains why shape-shifters like Mitt Romney are “electable,” while ideologically consistent people like Ron Paul and Dennis Kucinich are considered “fringe.”

I’m glad Lawrence O’Donnell now calls out the president for his inconsistency on the marijuana issue, instead of deluding himself into thinking the president will end the war on drugs.

(ALSO: While we’re talking drug war blues, I’d like to say something I’ve probably only said twice before in my life: I agree with Nancy Pelosi (ugh!). Why? Yesterday, she basically told the Obama administration to quit raiding California medical marijuana dispensaries.)

Check out The Last Word below, via MSNBC: