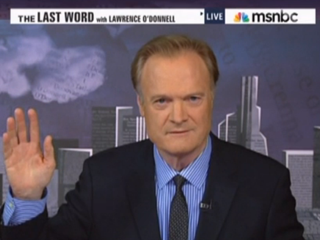 Like many people, Lawrence O’Donnell expressed his disgust today at a Republican ad by candidate Pete Hoekstra depicting a Chinese woman thanking his congressional opponent for making China strong. O’Donnell did not bother too much with attacking Hoekstra or the Republicans, however, and instead went after the young actress in the ad, calling for actors to take a vow of “simple decency” and boycott these ads.

“Political ads that are that ugly and that stupid aren’t usually traceable to a candidate– that’s what SuperPACs are for,” O’Donnell noted. Luckily in some ways, this time Hoekstra ended the ad with his approval. He did not focus on Hoekstra so much as the actress in the video, however, and directly attacked her, noting that he has tried to find her for an interview to no avail. He added that Hoekstra has said she is “100% Chinese” without revealing her name. “I want to know exactly what she was thinking,” he noted, and then turned back the Hoekstra, in effect accusing him of hiding behind her image and suggesting one thing is for him to expound ideas and another “for him to hire an actor to do his dirty work for him.”

“It can be stopped right now, tonight, by a pledge of simple decency that all member of the Screen Actors’ Guild can make,” he noted, putting his right hand up as to make a promise: “I will not play dirty politics… that means that you will not play a character in political ads.” After his attack on the actor in the video, however, he explained that many actors engage in such things because of money problems, recounting the story of an actor he once “talked out of playing Hitler’s daughter” by asking if, in the worst case scenario that that was the last part she ever played, she would want to be remembered by it. “I have done things that I’m not proud of,” he concluded, “but I have not done anything I am ashamed of.”

The segment via MSNBC: