Mad Men Recap: Not Even The Beatles Can Make Don Draper Happy

Mad Men Recap: Not Even The Beatles Can Make Don Draper Happy 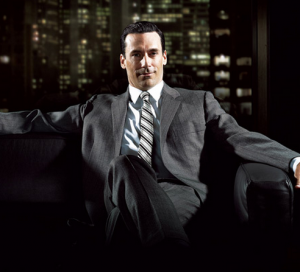 Just when you thought Pete Campbell’s life couldn’t get any sadder, and he couldn’t get any grosser, he sleeps with his commuter buddy Howard’s wife, played by Alexis Bledel (it was so weird to see Rory Gilmore in the Mad Men universe, and it didn’t get any less weird as the episode went on). In typical Pete fashion, he believes this is the start of a relationship, and calls and harasses Rory Gilmore at home, until he finally gets Howard to bring him home after work one night to talk about his life insurance policy. (We do learn this episode that Pete’s policy with the company covers suicide after two years, which is terrifying, and either the writers toying with viewers who are convinced Pete is going to die this season, or the writers having fun at their expense. As always with this show, it’s unclear.)

Pete slips Rory a note asking her to meet him in a hotel room in the city in the middle of the day, and when she doesn’t show he breaks a glass against the wall and storms out. Earlier in the episode he asks Harry Crane of all people, “Why do they get to decide what’s going to happen?” presumably meaning women in general. “I don’t know,” Harry replies, “They just do.”

The biggest story of the night belongs to Megan Draper, who has appeared to be hiding something all season. This episode, she confirms that her big secret is that she wants to be an actress. Not only that, but she also doesn’t want to be a copywriter anymore. This was a disappointing storyline, in part because I can’t help but find Megan’s ambition so dumb. Moreover, we haven’t seen much evidence of her talents (besides her successful maneuvering with Heinz, which seems like a different breed of acting talent than is needed to perform on Broadway), and we have seen her succeed wildly in her current line of work, so quitting to pursue a pipe dream — when the catalyst is a call back for a role that she doesn’t get, no less — seems immature and foolish. Joan seems to agree with me, privately commiserating with Peggy about her disappointment with Megan’s resignation.

“Did you know Betty was a model?” she asks in a tone so bitchy and amazing, I watched it more than once. “That’s the kind of girl Don marries.”

Perhaps Megan’s foolishness and pursuit of her youthful dream is the takeaway from this episode, though — that the younger and more adaptable generation is remaking society, and the old guard has to either play by their rules or be content with their increasing irrelevance. Even though Don is surprisingly accepting of Megan’s desire to quit, he feels the void of her absence immediately, when a pitch for Cool Whip that she was supposed to help with, as one half of “Mr. and Mrs. Draper,” goes terribly awry when Peggy fills in instead and can’t remember the catchphrase they’re supposed to be pitching, “Just Taste It” I got an even worse feeling about this new development when Don came home to find Megan literally barefoot in the kitchen cooking, and she later heads out to an acting class, giving Don the new Beatles album on her way out. He puts on the song she recommends, which is “Tomorrow Never Knows,” and he settles alone in his enormous apartment to listen to it, drink in hand. There is a montage of Stan and Peggy working and passing a joint back and forth, Pete looking forlornly at Rory Gilmore as she draws a heart in the condensation on the car window (barf), and Megan lying on the floor in the dark for some kind of acting exercise. Suddenly, the music stops and we’re back with Don, who stands up and ambles slowly into the bedroom, alone, in silence.