Maddow On ‘Insane’ And ‘Mindless’ GOP: They Loved Obama’s Gun Proposals… Until He Started Proposing Them
VIDEO

Maddow On ‘Insane’ And ‘Mindless’ GOP: They Loved Obama’s Gun Proposals… Until He Started Proposing Them 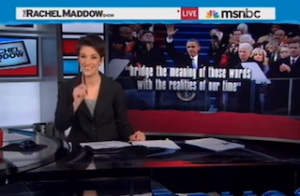 Rachel Maddow began her show tonight by examining some of the more “liberal” section of President Obama‘s second inaugural address, and his reference to gun control measures in particular. “But it turns out,” Maddow said of Obama gun proposals, “they are very popular. They are very, very, very widely popular.”

The host proceeded to display some recent polling by Gallup that shows Americans overall broadly support the proposals put forward by the administration to curb gun violence:

And even among Republicans, the vast majority of Obama’s prescriptions have wide support, as evidenced by this poll from The Washington Post and ABC News: After going through all of this data, Maddow concludes that “when you ask them about the things that the president’s proposing, pretty much Republicans think these things are good ideas, we ought to be doing them, they are in favor.” But, if you ask Republicans more generally if they support President Obama’s gun proposals, all of a sudden the vast majority of Republicans find them “unfavorable”: “After they said they support all the individual proposals, they said, well, ‘do you like the guy who’s proposing all these individual proposals that you liked?’ No, we hate those ideas. And that is insane. They like all the component parts of it. They like all these ideas. But then when these ideas that they like are proposed, they say they are against them because the person proposing them is President Obama. That is insane. That is mindless.”